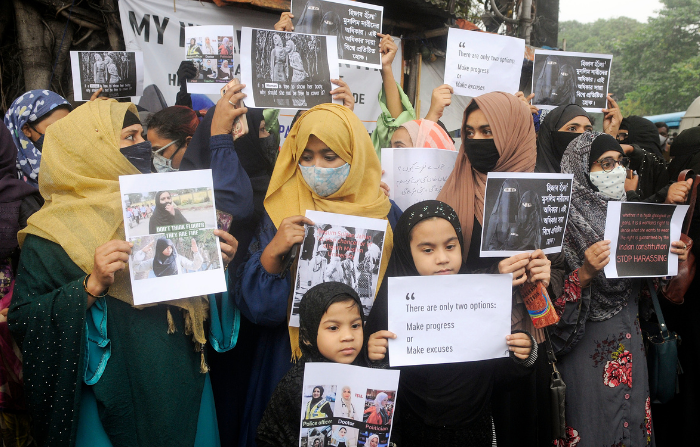 Women and young girls protest in favour of hijab in Kolkata in the eastern Indian state of West Bengal on February 10, 2022. (ANI Photo)

THE high court of the southern Indian state of Karnataka on Thursday (10) adjourned the hearing of petitions on the ongoing hijab row in several of the state’s educational institutes till Monday (14).

The bench also gave indication during the hearing that it will direct reopening of colleges in Karnataka but would not allow any student to wear religious garments, including the petitioners who have challenged the decision to ban wearing of the hijab (headscarves) by the girl students, till a verdict is given.

Government is with each victim Muslim woman: Modi

“We will pass an order that let the institutions start, but till the matter is pending, these students and stakeholders will not insist on wearing any religious garment or head dress. We will restrain everyone. We want peace and tranquility in the state,” the bench said verbally.

“Till the disposal of the matter, you people should not insist on wearing all these religious things. We will restrain everyone from adopting these practices,” it added.

The bench started hearing on the petitions a day after a single-judge bench of Justice Dixit said the petitions brought up important constitutional questions and should be referred to a larger bench.

Earlier on Thursday, the Supreme Court of India refused a plea to urgently transfer the cases from the high court to it. The cabinet of Karnataka government decided on Wednesday (9) to await the court’s verdict before taking a call on the issue which has snowballed into a crisis.

Meanwhile, Kamal Pant, the police commissioner of state capital Bengaluru, promulgated prohibitory orders against any kind of gathering, agitation or protests within 200-metre radius from the gates of schools, pre-university colleges, degree colleges or other similar educational institutions in the city till February 22. 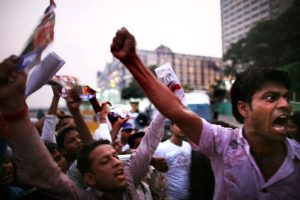