HILARIOUS! Nobody quite clear who was leading Pakistan in 1st Test vs New Zealand in Babar Azam absence 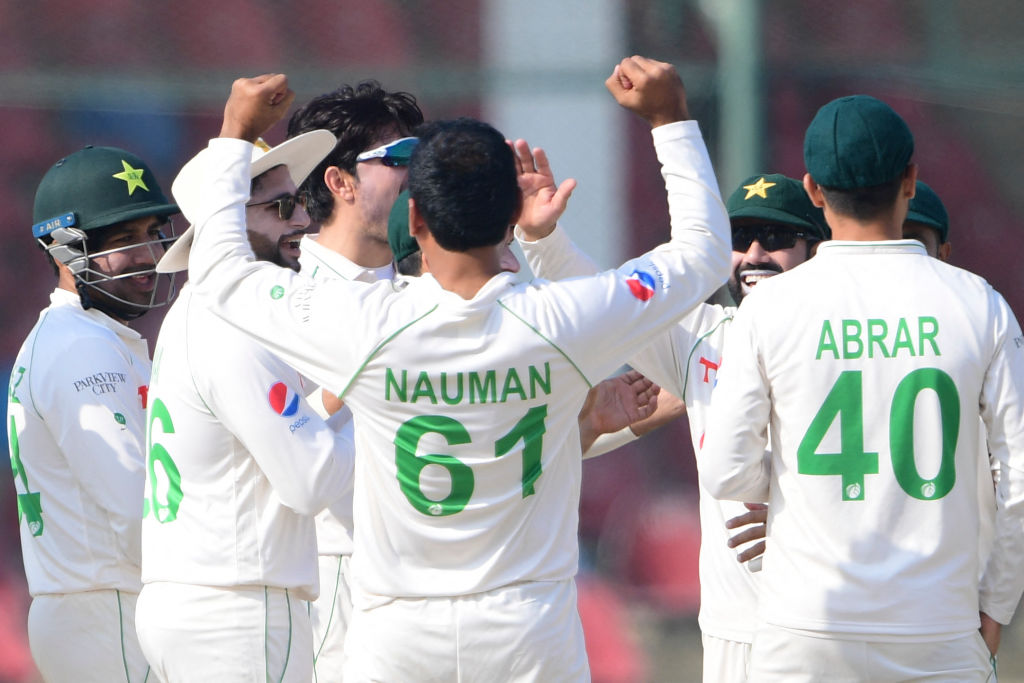 Pakistan players celebrate the fall of a New Zealand wicket in the first Test at the National stadium in Karachi on December 28, 2022. (Photo by Asif HASSAN / AFP) (Photo by ASIF HASSAN/AFP via Getty Images)

The third morning of the ongoing first Test match between Pakistan and New Zealand in Karachi remained witness to an unusual scenario. With regular captain Babar Azam, who slammed a hundred in the first innings, failing to take the field due to flu, it was expected that the home team management would depute somebody from the playing XI to take charge since the team’s designated vice captain in Mohammad Rizwan was dropped for the game.

Then something unique happened. Rizwan was seen leading the team after coming to the ground as a substitute and even took calls on the ground, something that puzzled many since the laws say that a substitute cannot act as a captain.

He spoke to Rizwan right away before taking the review. And Sarfaraz is the stand-in captain. https://t.co/wC52P2KSSI pic.twitter.com/oDU7ST06ph

Later, the hosts made it clear that former captain Sarfaraz Ahmed, who is keeping for them in the Tests in place of Rizwan, was in charge but it was reported that he too went for a review after consulting Rizwan. The moment was caught on camera and the fans were left in splits with the confusion on the ground.

The Pakistan team management clarified that it was Ahmed who was the stand-in captain in the absence of Azam and not Rizwan. But their actions on the ground failed to give a clear idea about who was actually leading the side.

Meanwhile, the Kiwis consolidated their position in the game at stumps on Day 3 by taking a four-run lead over the hosts with four wickets in hand. They were 440 for 6 in reply to Pakistan’s 438 with opener Tom Latham (113) and captain Kane Williamson (105) slamming centuries. Devon Conway, the other opener, fell for 92.

Pakistan recently lost 0-3 in a three-match Test series against England at home.

Here are some reactions that Twitter came up to the incident in Karachi:

Wait, they bettered it 😂 Sarfaraz, who replaced Rizwan in the XI, is the official captain, while Rizwan, who is on as a substitute, seems to be unofficially in charge. Peak Pakistan cricket.#PAKvNZ #PAKvsNZ https://t.co/m4hpPzu72X

Burns was given 59 inns too. That's a fair sample size to judge a player's performance. You are implying that if you are captain you can afford to have a low average. That's a first for me.

The commentators even said that Rizwan was captain. How weird is this ? And umpires even allowed it ?

Lol 🤣, Rizwan is setting fields and changing bowlers.
While Sarfaraz is designated captain only for taking Review!! 👌🏻