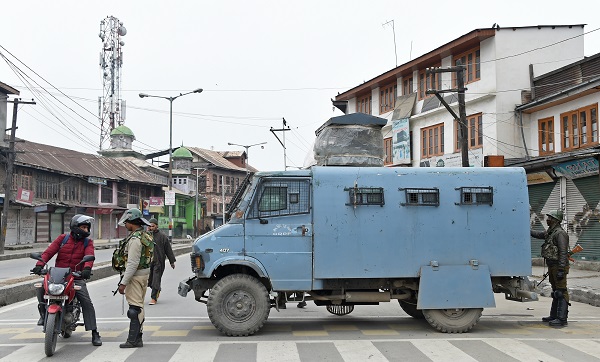 An indefinite curfew was imposed in the town, with more troops deployed to the area to deter sectarian violence, Rana added (Photo: TAUSEEF MUSTAFA/AFP/Getty Images).

Unknown gunmen burst into a hospital in India’s northern state of Jammu and Kashmir and killed a regional leader of a Hindu group, the police said on Tuesday (9), days before general elections at which security is a major concern.

Authorities imposed an indefinite curfew in the town of Kishtwar, after the killing of Chandrakant Sharma, 48, and a bodyguard.

Sharma was a leader of the Rashtriya Swayamsevak Sangh (RSS).

He was flown to a hospital at the Government Medical College in Jammu, but succumbed to his injuries, Rana added.

An indefinite curfew was imposed in the town, with more troops deployed to the area to deter sectarian violence, Rana added.

“He was the centre of hope and trust for a patriotic society that is against terrorism,” said Manmohan Vaidya, general secretary of the RSS.

“His sudden demise is an irreparable loss for the Hindu community.”

The killing is the second of a Hindu leader in the town since November, when a BJP leader, Anil Parihar, 52, and his brother, Ajeet, 55, were killed.

Sharma was a close associate of Parihar.

Voting in south Kashmir, bordering the area where Sharma was killled, will happen in phases, to protect against a heightened risk of attack by armed militants.