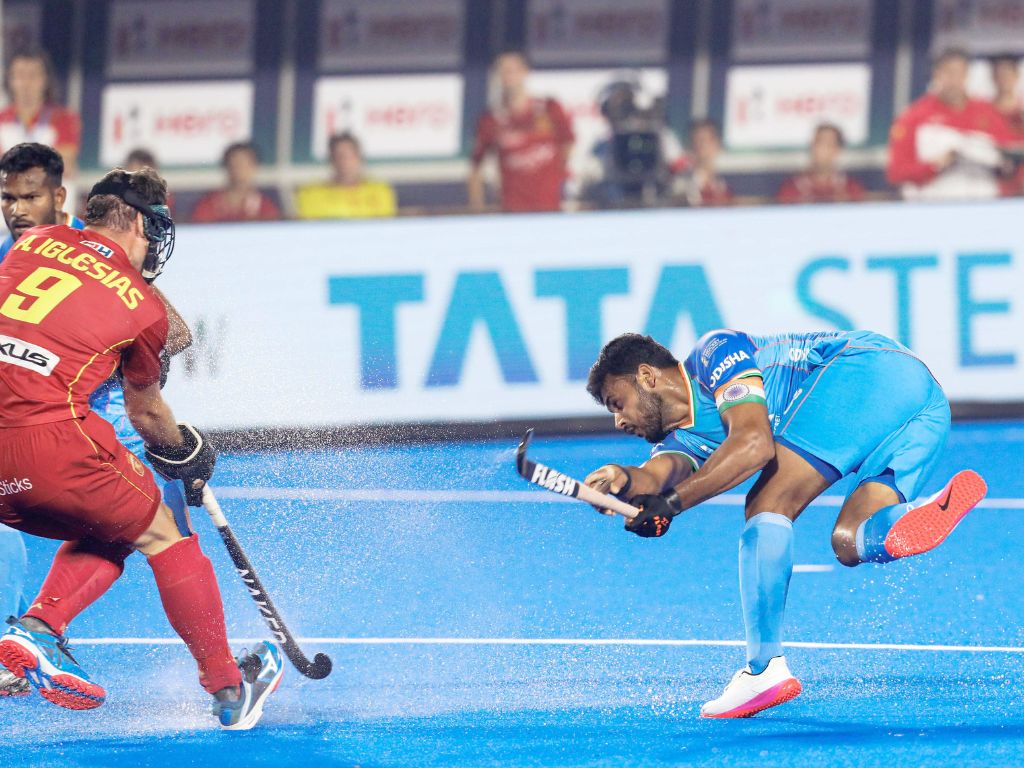 Hosts India’s 2023 Hockey World Cup campaign on Friday (13) began with a 2-0 victory over Spain, earning them three crucial points in the Group D clash at the Birsa Munda International Hockey Stadium in Rourkela in the eastern state of Odisha.

Amit Rohindas and Hardik Singh scored for India in the 12th and 26th minute of the game, respectively, to give the 1975 winners a brilliant start.

In spite of Abhishek receiving a 10-minute yellow card in the final quarter, the Indian team held off the Spaniards and maintained a clean sheet. Spain attacked right from the start as India took time to settle down in the initial minutes of the first quarter. However, the Indian players found their rhythm soon and took possession of the ball.

The first 10 minutes in the first quarter saw both teams looking to attack and take the lead early in the game. While the hosts looked to attack the Spanish left flank, the European side were unable to penetrate the resolute Indian defence.

India earned their first penalty corner (PC) of the game in the 12th minute thanks to an outstanding effort from Abhishek in the circle. However, the Indians were unable to score as Jarmanpreet’s drag missed the target and his attempt was deflected off a Spanish defender.

The hosts got their second PC in the first quarter which was taken by captain Harmanpreet Singh. An alert Amit Rohidas converted the rebound as the host took the lead in the 13th minute.

India ended the first quarter with a 1-0 lead over the Spanish team with the hosts penetrating their opponent’s box regularly.

The Indian defence was put under the pump by Spanish attackers in the second quarter as they won their first PC in the 24th minute. However, the European side was unable to convert the opportunity at the Indian goalpost. Pau Cunill failed to find the target as Pathak deflected the flick from the defender.

Attacking midfielder Hardik Singh displayed fabulous stick skills to run into the box from the left side and stormed past the Spanish defenders to score a spectacular field goal, extending India’s lead to 2-0.

Spain were on the verge of finding their first goal in the dying minutes of the second quarter but the combined defence of Surender Kumar and Pathak denied the European team the goal.

The first half ended with India leading 2-0 as they scored once in both quarters and maintained a clean sheet against a spirited Spanish team.
Spain had a stroke of luck at the beginning of the fourth quarter as Abhishek got yellow card and the hosts were reduced to 10 men for the final quarter. The Spanish side were awarded two PCs in the fourth quarter but failed to convert on both occasions as India secured a 2-0 win in their World Cup opener.

Rohindas was declared the player of the match.

India secured three vital points in Group D after the win and are second on the points table after England who thrashed Wales 5-0 earlier in the day.

India will face England on January 15 at the same venue on Sunday (15).

In the 2018 edition of the marquee tournament which was also played in Odisha, India’s campaign was terminated by the Netherlands in the quarter-finals with a 2-1 win.