Imran Khan makes first speech after assassination bid: This is what he said 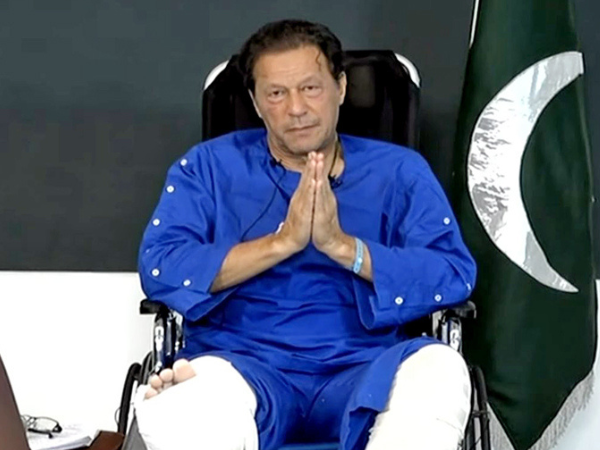 Former Pakistan prime minister Imran Khan speaks from a hospital in Lahore on Friday, November 4, 2022, a day after he was shot in his leg during a political rally in the country’s Punjab province. (ANI Photo)

Former Pakistan prime minister Imran Khan on Friday (4) said he was hit by four bullets on his right leg during the assassination attempt by two shooters a day earlier, when he was leading a political march in Punjab province.

Addressing the nation from the Shaukat Khanum Hospital in Lahore in his first address since the assassination attempt, Khan said that he was aware of the plot to kill him.

“I’ll come to the details of the attack later. I got to know the day before [the attack] that either in Wazirabad of Gujrat, they planned to kill me,” the 70-year-old chief of the Pakistan Tehreek-e-Insaf (PTI) party claimed.

“I was hit by 4 bullets,” Khan, whose right leg was plastered, said.

Dr Faisal Sultan, who is treating the cricketer-turned-politician, said X-rays of Khan’s right leg showed that his tibia was damaged and in fact fractured.

“In this scan, the line you see on right leg is the main artery. The bullet fragments were very near it,” Sultan said.

Khan suffered a bullet injury on the right leg when two gunmen man fired a volley of bullets at him and others mounting on a container-mounted truck in the Wazirabad area of Punjab province, where he was leading a protest march against the Shehbaz Sharif government.

He described the attack on his life and said he was on the container when a “burst of bullets” was directed at him, causing him to get shot in the leg and fall down.

“Then a second burst comes, there were two people,” he said, narrating the incident. He said that if the two bullet sprays had been synchronised, he would not have survived.

“Because I fell down, I think he [the shooter] thought I had died and fled,” he said.

Khan noted that one suspect, claiming to be an extremist, had been arrested. “He is not an extremist. There was a plan behind the attempt [and] we will uncover it,” he said.

The former premier said that three others, separate from the ones who he had named in a tape stashed abroad, had plotted to kill him.

“How did I find out? Insiders told me. The day before Wazirabad, they made the plan to kill me as they saw the number of people increasing using the script of religious extremism,” he said.

Khan has alleged that the “government and its handlers” had planned to get him murdered in the same way as former Punjab governor Salman Taseer was killed.

“Firstly, they accused me of blasphemy […] they made tapes and released them and PMLN projected it, I knew who was doing it…This [the attempted assassination] happened exactly according to the script,” he said.

Khan, who was ousted from power in April after losing a no-confidence vote in his leadership, has talked about a ‘threat letter’ from the US and claimed that it was part of a foreign conspiracy to remove him as he was not acceptable for following an independent foreign policy.

The US has bluntly rejected the allegations. He has been demanding early elections and he is leading the long march towards Islamabad to force his demands. The term of the National Assembly will end in August 2023 and fresh elections should be held within 60 days.