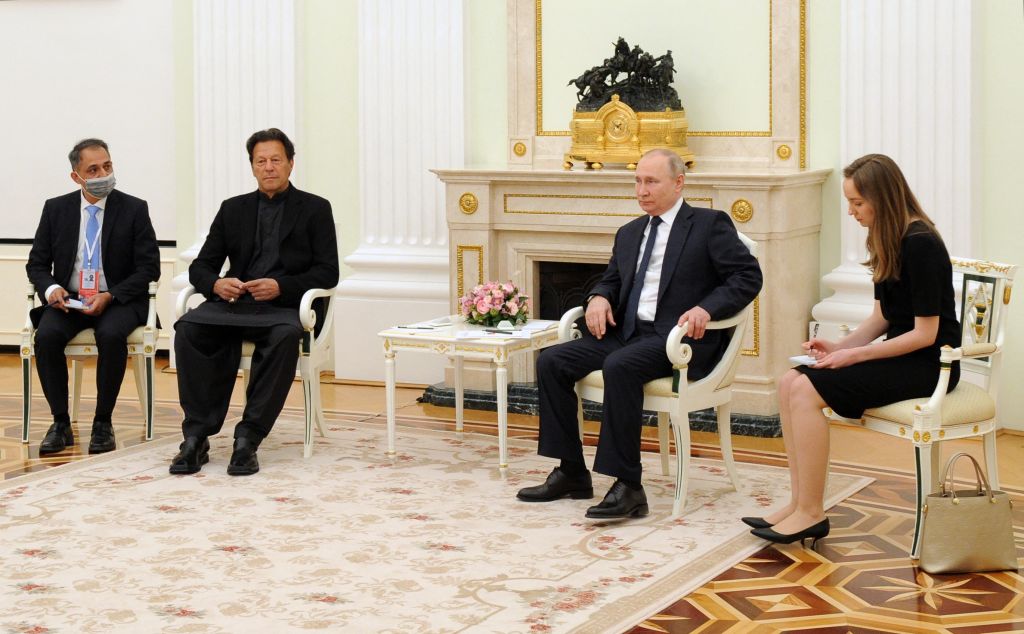 RUSSIA’S president Vladimir Putin met Pakistan prime minister Imran Khan in Moscow on Thursday (24) in his first face-to-face talks since the start of a special military operation in eastern Ukraine.

During their meeting in the Kremlin, the leaders discussed bilateral cooperation and current regional topics, including developments in south Asia, said a brief statement issued by the Russian president’s office.

Khan stressed the “peaceful resolution” of the Jammu and Kashmir dispute, the official APP news agency of Pakistan reported. The Pakistan prime minister also emphasised the need for measures to help keep the “regional balance”, it said.

Earlier this month, the Russian embassy in New Delhi had said in a statement said the “Russian official position on the issue of Kashmir and Russia’s principled stance on non-interference in bilateral disputes remain unchanged.”

“A solution should be found between India and Pakistan only, and it should be based on the agreements achieved, including the Simla Agreement of 1972 and the Lahore Declaration of 1999,” it said.

The regional situation, including the developing scenario of Ukraine, also came under discussion, it added.

Khan highlighted Pakistan’s commitment to forging a “long-term, multidimensional relationship” with Russia and cooperation between the two countries, including at the Shanghai Cooperation Organisation (SCO).

He also discussed addressing the humanitarian crisis and preventing potential economic meltdown in Afghanistan; Khan reiterated that Pakistan would continue to work with the international community for a stable, peaceful and connected Afghanistan.

In his talks, Khan “regretted” the latest situation between Russia and Ukraine and said Pakistan had hoped diplomacy could avert a military conflict. He emphasised that conflict was not in anyone’s interest and added that developing countries were the hardest hit. He spoke of Pakistan’s belief that disputes should be resolved through dialogue and diplomacy.

Putin also hosted a luncheon for him.

In Washington, Department of State Spokesperson Ned Price said the US communicated its position to Islamabad on Russia’s “renewed invasion” of Ukraine and said it was the “responsibility” of every country to voice objection to Putin’s actions.

“Well, we’re certainly aware of the trip,” Price said. “We’ve communicated to Pakistan our position regarding Russia’s further renewed invasion of Ukraine, and we have briefed them on our efforts to pursue diplomacy over war.”

In an interview with Russia’s state-run RT television network ahead of his trip, Khan, 69, had voiced concern about the situation in Ukraine and the possibility of new sanctions and their impact on Islamabad’s growing cooperation with Moscow.

Khan, a cricketer-turned-politician, is the first Pakistani prime minister to visit Russia in 23 years after former prime minister Nawaz Sharif travelled to Moscow in 1999.

Pakistan’s ties with Russia have moved past the bitter Cold War hostilities in recent years and the chill in the relations between Pakistan and the US has further pushed the country towards Russia and China.

The two countries are not just exploring options to deepen economic ties, but Russia is also keen to sell arms to Pakistan, something it avoided in the past because of India’s opposition to that.

Both Pakistan and Russia have been holding regular joint military exercises since 2016 in another sign of deepening ties between Moscow and Islamabad.

The two countries also share the same view on key regional and international issues, including Afghanistan.