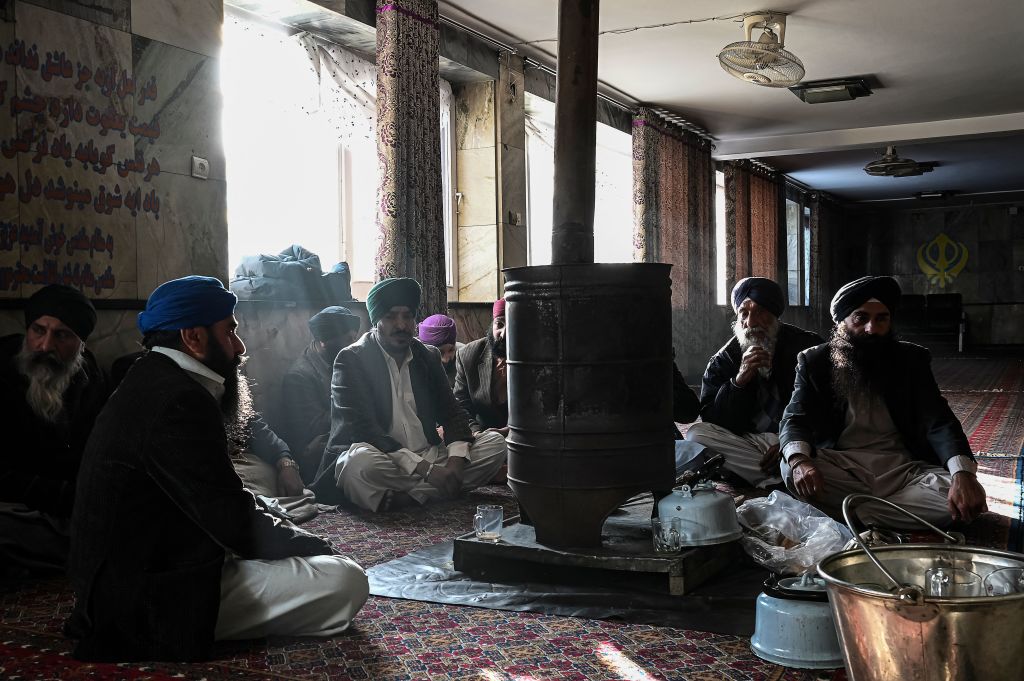 This picture taken on December 31, 2021 shows Afghan Sikh devotees sitting next to a heater after offering prayers at the Karte Parwan Gurdwara temple in Kabul, Afghanistan. (Photo by MOHD RASFAN/AFP via Getty Images)

INDIA on Saturday (18) expressed deep concern over the attack at a gurdwara in Kabul, the capital of the Taliban-ruled Afghanistan, the same day and said it was keeping a close watch on the situation.

A group of unidentified gunmen stormed Gurdwara Karte Parwan and opened fire in which at least two persons were killed.

Arindam Bagchi, spokesperson of India’s external affairs ministry said in a statement, “We are deeply concerned at the reports emanating from Kabul about an attack on a sacred gurudwara in that city.”

The very few Afghan Sikhs who decided to stay in Afghanistan irrespective of the imminent dangers were those who wanted to upkeep the Gurudwaras of Afghanistan. Yet again, Gurdwara in Kabul, Afghanistan is currently under attack. Sikh families currently live within the complex. pic.twitter.com/QliaHHmrRf

He added that the ministry was keeping a close watch on the Afghanistan situation and “waiting for further details on the unfolding developments.”

India’s external affairs minister Subrahmayam Jaishankar condemned the attack to say, “The cowardly attack on Gurudwara Karte Parwan should be condemned in the strongest terms by all.”

The cowardly attack on Gurudwara Karte Parwan should be condemned in the strongest terms by all.

We have been closely monitoring developments since the news of the attack was received. Our first and foremost concern is for the welfare of the community. https://t.co/ocfuY0RBhN

India’s petroleum and natural gas minister Hardeep Singh Puri tweeted, “Deeply concerned to hear about the heinous attack on Gurdwara Karte Parwan in Kabul. Pray for the well-being and safety of the members of the Sangat.”

Bhagwant Mann, the chief minister of the northern Indian state of Punjab said, “Strongly condemn the attack at Gurudwara Karte Parwan in Kabul. Have heard reports of shots being fired at devotees, I’m praying for everyone’s safety.”

Mann also urged Indian prime minister Narendra Modi and the external affairs ministry to provide immediate assistance to ensure that the minorities in Kabul were safe.

Strongly condemn the attack at Gurudwara Karte Parwan in Kabul. Have heard reports of shots being fired at devotees, I’m praying for everyone’s safety. I urge PM @narendramodi ji and @MEAIndia for immediate assistance to ensure the safety of minorities in Kabul.