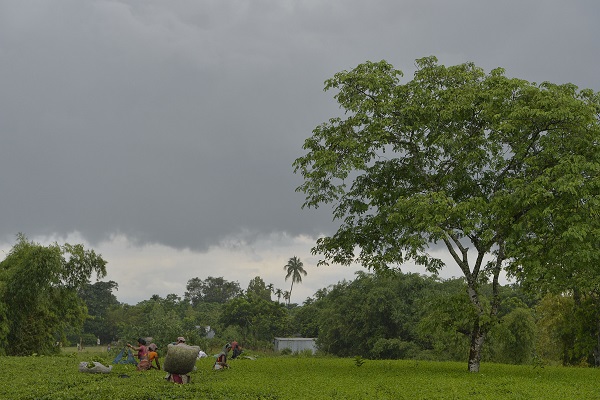 Indian tea worker plucking leaves at a tea plantation as monsoon cloud loom over the sky on the outskirts of Siliguri on July 16, 2018 (Photo: DIPTENDU DUTTA/AFP/Getty Images).

India is likely to see average monsoon rains this year, the state-run weather office said on Monday (15), which should support agricultural production and economic growth in Asia’s third-biggest economy, where half of the farmland lacks irrigation.

Monsoon rainfall is expected to be 96 per cent of the long-term average, M Rajeevan, secretary at the Ministry of Earth Sciences, told a news conference.

The India Meteorological Department (IMD) defines average, or normal, rainfall as between 96 per cent and 104 per cent of a 50-year average of 89 centimetres for the entire four-month season beginning June.

“Overall, the country is expected to have well distributed rainfall scenario during the 2019 monsoon season, which will be beneficial to farmers in the country during the ensuing Kharif (summer-planting) season,” the IMD said in its forecast.

Skymet, the country’s only private weather forecasting agency, earlier this month forecast rainfall could be below normal this year.

Monsoon rains, the lifeblood for India’s farm-dependent £1.99 trillion economy, arrive on the southern tip of Kerala state around June 1 and retreat from the desert state of Rajasthan by September.

After a wet spell, sowing of summer-sown crops gets off to a strong start, boosting crop yields and output which in turn raises rural incomes and usually lifts consumer spending in India.

The next policy review by India’s central bank is scheduled for June 6, after the country’s election.

On the downside, higher production could mean farmers continue to get hit by low crop prices, a major cause for concern in rural India, where most Indians live, in the past two years.

After falling for five straight months, retail food prices in India rose 0.30 per cent in March from a year earlier.

Last month, a senior IMD official said that this year’s monsoon was likely to be robust and healthy provided there wasn’t a surprise El Nino phenomenon.

“El Nino is weakening and we expect that El Nino will get weakened further. There is no reason to be worried about El Nino,” Rajeevan said.

A strong El Nino, marked by a warming of the sea surface on the Pacific Ocean, can cause severe drought in Australia, Southeast Asia and India, while drenching other parts of the world such as the US Midwest and Brazil in rains.

The emergence of a strong El Nino triggered back-to-back droughts in 2014 and 2015, for only the fourth time in over a century, driving some Indian farmers to penury and suicide.

India’s weather office will update its forecast in the first week of June.

On an average, the IMD has forecast accurately only once every five years over the past two decades, even after taking into account an error band of plus or minus five percentage points.