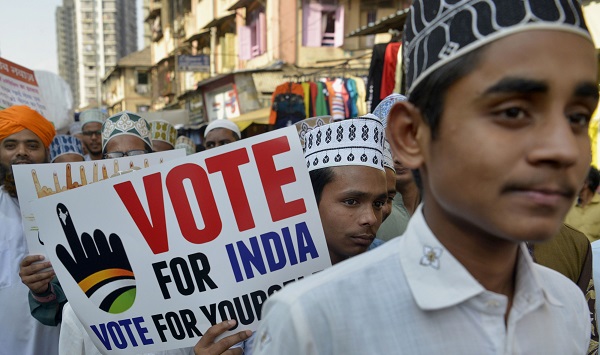 From the moment the election was announced on March 10, special laws took effect banning all Indians from carrying large amounts of money, gold or silver to reduce the risk of politicians buying votes (Photo: PUNIT PARANJPE/AFP/Getty Images).

Around 900 million Indians are eligible to vote in the mammoth polls, which start April 11 and run nearly six weeks in a huge endeavour some experts say could cost £7.57 billion.

From the moment the election was announced on March 10, special laws took effect banning all Indians from carrying large amounts of money, gold or silver to reduce the risk of politicians buying votes.

Officials such as police and railway staff are granted temporary powers during the campaign to seize booze, cash or other goods they believe are being used to sway voters.

So far, authorities have confiscated 4.4 million litres of liquor and Rs 1.5bn in cash considered suspicious, the election commission said in a statement.

Illegal drugs worth an almost similar amount had been seized, the commission said.

“Freebies” stockpiled in trucks along highways worth an estimated Rs 120m were also confiscated. No exact description of the goods was provided, but in the past political parties have used mobile phones, televisions and other electronic gadgets to entice votes.

Poorer voters are particularly targeted by unscrupulous politicians during elections and plied with cash and luxury items to garner support and influence.

To combat this, special election laws prohibit anybody from possessing more than one kilogram of gold or silver, or carrying in excess of one million rupees, until the results are declared on May 23.

This election, a mobile-based application lets voters report any wrongdoing taking place in their electorate, in a bid to clean up the the poll.

Prime minister Narendra Modi, whose Bharatiya Janata Party stormed to power in 2014, must fend off Rahul Gandhi and his Congress party to return to high office.