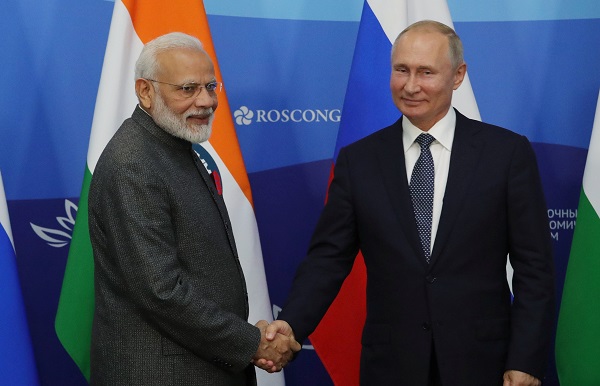 IN a major breakthrough in Indo-Russian defence ties, India will start manufacturing spare parts and components for the Russian military equipment, as the two strategic partners tried to transform their existing buyer-seller relationship into one of collaboration.

According to a joint statement, the two countries expressed their commitment to upgrading their defence cooperation, including by fostering joint development and production of military equipment, components and spare parts, improve the after-sales service system.

Both countries agreed to take forward ongoing engagement to encourage joint manufacturing in India of spare parts, components, aggregates and other products for the maintenance of Russian origin Arms and defence equipment under the Make-in-India programme through the transfer of technology and setting up of joint ventures.

Briefing reporters on the Modi-Putin talks, Foreign Secretary Vijay Gokhale said the agreement for manufacturing spare parts for the Russian military equipment was in tune with prime minister Modi’s wish to transform the Indo-Russia defence relationship from one of buyer-seller to a collaborative one.

In the joint statement, the two sides recognised the need for an institutional arrangement for reciprocal provision of logistic support and services for the Armed Forces.

It was agreed to prepare a framework for cooperation on reciprocal logistics support, it said.

During their joint address to the media, president Putin said Russia has been a reliable partner to India in the field of defence for the last five decades.

Putin and Modi earlier in the day visited the Zvezda ship-building facility in Vladivostok.

Meanwhile, a senior Russian defence official said India has ordered from Russia a total of $14.5 billion worth of weapons and other military equipment.

“Last year and today saw the emergence of a tremendous portfolio of contracts in contrast to all previous years, $14.5bn. This is an impressive figure, it’s a real breakthrough,” the chief of the federal service for military-technical cooperation, Dmitry Shugayev, said on Wednesday (4).

“Military cooperation between Russia and India is the most important element of privileged strategic interaction,” he was quoted as saying by the official Tass news agency.

Shugayev noted that last year, although India was under pressure, mostly from the US, major contracts were concluded for the supply of S-400 missile systems, frigates of project 11356, and a large batch of ammunition for the Air Force, the Navy and the ground forces.

“Currently we proceed with talks on the supply and licensed production of the portable air defence system Igla-S for India. We won a one-billion-dollar bidding contest,” Shugayev was quoted as saying by the report.