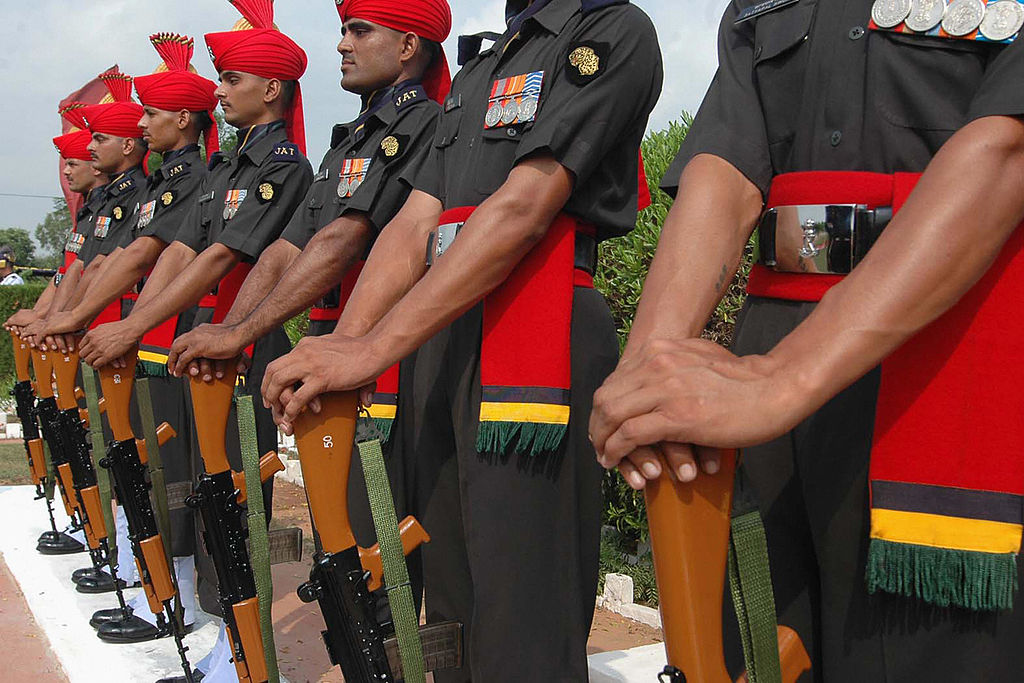 Indian soldiers at a ceremony. (Photo by NARINDER NANU/AFP via Getty Images)

THE Indian defence ministry on Tuesday (14) unveiled a new defence recruitment model called the ‘Agnipath’. The move came after the Cabinet Committee on Economic Affairs and the Union cabinet met and approved the fresh proposal scheme for the country’s armed forces. The chief of one of India’s three armed forces called it “a new idea of the new era”.

Under the scheme, young soldiers will be released after four years of service.

Addressing a press conference in New Delhi, Indian defence minister Rajnath Singh said the scheme will give a better opportunity to the youth who serve the nation.

“The Cabinet Committee on Security has taken a historic decision today to approve the transformative scheme of ‘Agnipath’. Under this, Indian youth would be granted an opportunity to get inducted into the Armed services,” he said.

“Under the ‘Agnipath’ scheme, efforts are to create a youthful profile of the Armed forces. It would help to train them for new technologies & also improve their health levels. This scheme will increase employment opportunities with new skills in different sectors,” the minister added.

Singh said the candidates, called the ‘Agnivirs’, will get a good pay package and an exit retirement package after four years of service.

Lieutenant general Anil Puri, additional secretary, the department of military affairs, said, “Today, an average age of the recruitment is around 32 yrs, in the time to come, it will further come down to 26 years. This will happen in six to seven years. In order to transform armed forces into youthful, tech-savvy, modern, there’s a need to harness the youth potential & make him a future-ready soldier.”

“Agnivir would be a part of this future-ready soldier. Agnivir would be India’s young protector. After being with us for 4 yrs, an agnivir’s resume & biodata will be very unique. He’ll stand out in crowd with his attitude, skills & time he would’ve spent with us,” he added.

He also said, “We will provide an opportunity to the youth to serve the nation for short and long duration, as agnivirs… We are giving youth a chance for both long and short duration military service.

“Model is based on all-India merit-based selection process. We are looking at the best to serve the armed forces between the ages of 17.5 to 21 years. Once selected, agnivirs will serve for 4 years with us.”

Indian Navy chief Admiral R Hari Kumar said, “Agnipath scheme is a new idea of the new era. An idea that is made in India and made for India. An idea that will have positive impact on the human resources management of armed forces.