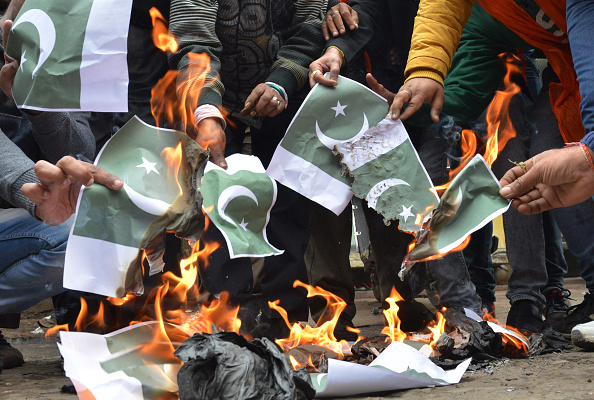 FILE PHOTO: Activists of Shiv Sena shout slogans as they burn Pakistani flags during a protest in India’s Amritsar on February 15, 2019, the day after an attack on a paramilitary Central Reserve Police Force (CRPF) convoy in the Lethpora area of Kashmir (Photo: NARINDER NANU/AFP/Getty Images).

India’s prime minister Narendra Modi warned Pakistan on Friday (15) to expect a strong response to a car bomb attack on a military convoy in Kashmir that killed 44 paramilitary policemen, ratcheting up tensions between the nuclear-armed neighbours.

Coming just months ahead of a general election in India, the attack was the worst in decades in Jammu and Kashmir, even though there has been a long running insurgency in the country’s only Muslim majority state.

“We will give a befitting reply, our neighbour will not be allowed to de-stabilise us,” Modi said in a speech, after meeting with security advisers earlier to discuss options.

The White House urged Pakistan in a statement “to end immediately the support and safe haven provided to all terrorist groups operating on its soil”.

India said it had “incontrovertible evidence” of the Pakistan involvement in the attack. The Pakistan government responded with a stiff denial, while calling the attack a matter of “grave concern.”

As outrage and demands for revenge flooded Indian social media sites, Arun Jaitley, one of the most senior figures in the Hindu nationalist-led government, spelt out New Delhi’s diplomatic response.

“The ministry of external affairs will initiate all possible steps, and I am here referring to all possible diplomatic steps, which have to be taken to ensure the complete isolation from the international community of Pakistan,” Jaitley, the country’s finance minister, told reporters.

The first step, he said, would include removing most favoured nation (MFN) trade privileges that had been accorded to Pakistan – though annual bilateral trade between the two countries is barely $2 billion.

The last major attack in Kashmir was in 2016 when Jaish militants raided an Indian army camp in Uri, killing 20 soldiers. Weeks later, Modi ordered a surgical strike on suspected militant camps across the border in Pakistan Kashmir.

When he swept to power in 2014, Modi had vowed to tough line with mostly Muslim Pakistan. The two countries have gone to war three times since independence from Britain in 1947, twice over Kashmir.

The Line of Control, the disputed defacto border dividing Indian and Pakistani held Kashmir is widely regarded as one of the world’s most dangerous flashpoints, especially after the two countries became nuclear armed states in 1998.

Hundreds of thousands of Indian troops are deployed in Kashmir. Having waxed and waned since the late 1980s, the insurgency began to intensify in the last five years as a fresh generation of Kashmiris were drawn to militancy. And since last year, the number of attacks has increased.

Soon after Thursday’s attack, Jaish released photographs and a video of Adil Ahmad Dar, a young Kashmiri villager it said had carried out the suicide attack on the convoy as it passed through Pulwama district.

In the video, Dar warned of more attacks to avenge human rights violations in Kashmir.

Jaish is one of the most deadly groups operating in Kashmir, and has a long history of strikes against India.

In 2001, it mounted a deadly attack on the parliament in New Delhi that brought India and Pakistan to the brink of another war. India’s past efforts to add Jaish’s supremo, Maulana Masood Azhar, to a UN Security Council blacklist of al Qaeda-linked terrorists have been blocked by China.

Indian forces picked up seven people for questioning, after mounting a sweep in Pulwama, a police official said.

The bus in which the paramilitary personnel were travelling was part of a convoy of more than 70 vehicles on the heavily guarded Jammu-Srinagar highway.

Jammu and Kashmir Governor Satya Pal Malik said there were security lapses and authorities are investigating why such a large convoy, transporting nearly 2,500 security personnel, was on the road.