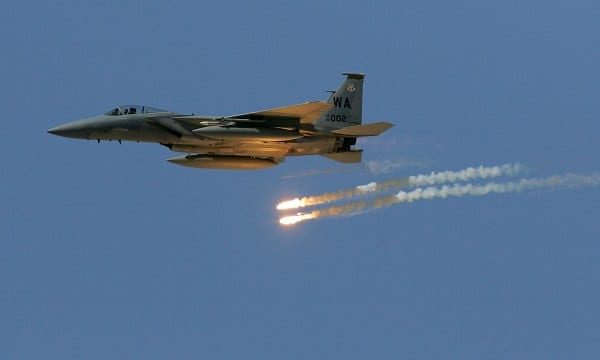 The 36-year-old IAF pilot Abhinandan was captured by the Pakistani Army on February 27 after his MiG-21 Bison jet was shot down in a dogfight with Pakistani jets during aerial combat, a day after the air-strikes on terror camps at Balakot deep inside the neighbouring country (Photo: Ethan Miller/Getty Images).

AIR Chief Marshal BS Dhanoa on Friday credited the national leadership for getting back Wing Commander Abhinandan Varthaman in record time after his capture by Pakistan during a military confrontation in February.

He also said the Indian Air Force (IAF) is ready for any military confrontation with Pakistan, but a decision about this has to be taken by the political leadership.

The 36-year-old IAF pilot Abhinandan was captured by the Pakistani Army on February 27 after his MiG-21 Bison jet was shot down in a dogfight with Pakistani jets during aerial combat, a day after the air-strikes on terror camps at Balakot deep inside the neighbouring country.

Before his jet was hit, he downed an F-16 fighter of Pakistan. Abhinandan was released on the night of March 1 by Pakistan.

Speaking at the India Today conclave here, Air Chief Marshal Dhanoa said he knew Abhinandan since he was a child as he has worked with his father, who was an IAF veteran.
“In Kargil, we lost Flight Commander Ajay Ahuja. He ejected (from his jet) but after he landed (across the border in Pakistan) he was shot… that was playing in my mind.

“I told Abhinandan’s father that we couldn’t get Ahuja back but will bring Abhinandan. It is credit to the national leadership that we could get Abhinandan in record time,” the IAF chief said.

Asked about his flight with Wing Commander Abhinandan recently, Air Chief Marshal Dhanoa said, “I wanted to fly one sortie before I hang my uniform. Abhinandan had been medically cleared. He sat in the rear and I sat in the front.”

The IAF chief is due to retire later this month.

Recalling the incident of Abhinandan’s capture by Pakistan, he said the decorated pilot’s behaviour while in custody was exceptional.

“He was blindfolded in some videos. We knew Ahuja didn’t come back. Abhinandan’s demeanour, posture, candidness with which he was speaking, speaks highly of his soldierly abilities.”

“We would have got the film and the kill. But to substantiate our case, we presented the radar picture and the track vanishing around the same time when Abhinandan was close to it.”

Asked about Islamabad all together denying the incident (of F-16 downing), he said, “Pakistan disowned its people in Kargil. The Indian Army buried the bodies with full religious rituals.”

The IAF chief said the soon to be inducted Rafale fighter jets will prove to be a “game-changer”.

The French jets are half a generation ahead in terms of avionics, weapons, missiles and data fusion, Air Chief Marshal BS Dhanoa.

“When I took over (as IAF chief) in March 2017, I wrote to my officers that we should be ready to fight a war at short notice if other side decides to. It is rhetoric for their population. We know what their capability is. It is not a two-front war.”

To a question about loss of a helicopter in self-action, the Air Chief Marshal said measures have been put in place to ensure such mistakes don’t happen again.

“For those responsible, law will take its course,” he said.

On the issue of women in combat role, he said the IAF has inducted women in all branches – ground duty and then flying.

“She is a soldier like anybody else and she is trained accordingly,” he said.

The IAF chief said India has a combination of Sukhoi-30s and BrahMos (a supersonic cruise missile) to which Pakistan has no answer.