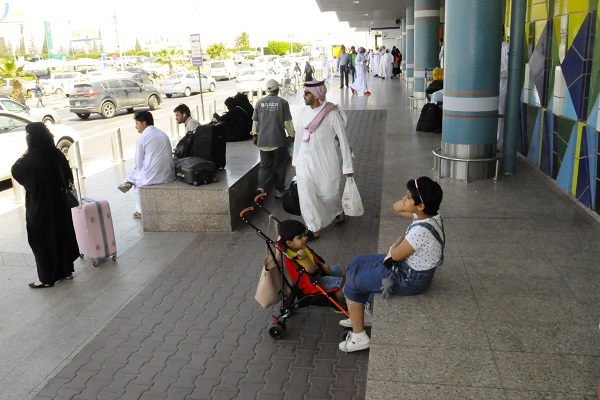 “A terrorist attack at Abha International Airport…led to the injury of 9 civilians – eight Saudis and one Indian national,” Coalition for the Support of Legitimacy in Yemen spokesperson Colonel Turki al-Maliki said in a statement (Photo: AFP/Getty Images).

AN Indian national was among nine people injured in an attack by Yemeni rebels on Abha international airport in southern Saudi Arabia on Tuesday (2), a spokesperson of the Saudi-led military coalition said.

“A terrorist attack at Abha International Airport…led to the injury of 9 civilians – eight Saudis and one Indian national,” Coalition for the Support of Legitimacy in Yemen spokesperson Colonel Turki al-Maliki said in a statement.

All injured are stable and under treatment at hospitals, Colonel al-Maliki was quoted as saying by the state-owned Saudi Press Agency (SPA).

He blamed the Houthi militia for the attack, which took place shortly after midnight on Tuesday.

“In the face of these acts of terrorism and the immoral violations by the Houthi terrorist militia, the command of the coalition forces continues to carry out strict measures to deter these terrorist militias in order to protect the civilian and civilian assets,” Colonel al-Maliki said.

“The terrorist elements responsible for the planning and execution of this terrorist attack will be held accountable in accordance with international humanitarian law and its customary rules,” he added.

Air traffic at the airport was not affected by the incident, tweeted the airport authorities.

The UAE strongly condemned the attack.

In a statement, the UAE Foreign Ministry and International Cooperation said the security of the UAE and the Kingdom of Saudi Arabia is indivisible.”

“Any threat or danger to the (Saudi) Kingdom’s security is considered a threat to UAE’s security and stability,” it said in a statement.

On June 12, a missile attack on Abha airport by the Houthis injured 26 civilians, including an Indian.

On June 23, another attack on Abha airport killed a Syrian national and injured 21 others.

The Saudi-led coalition intervened in Yemen in March 2015 to push back an advance by the Houthis and to restore to power President Abedrabbo Mansour Hadi.

Since then, the conflict has killed tens of thousands of people, mostly civilians, pushing the Arab world’s poorest country to the brink of famine.

The UN describes the Yemen conflict as the world’s worst humanitarian crisis, with 24.1 million, more than two-thirds of the population in need of aid.