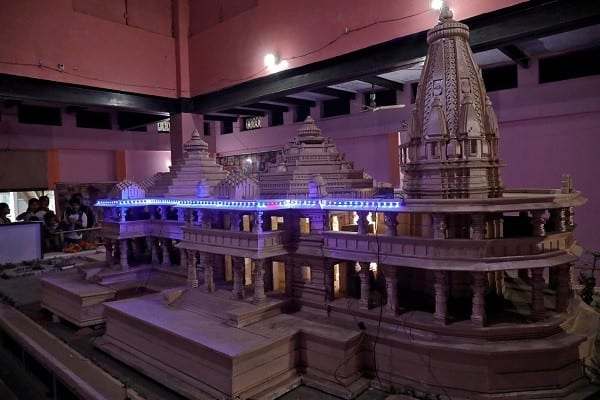 The model of a proposed Ram temple that Hindu groups want to build at a disputed religious site in Ayodhya in the northern state of Uttar Pradesh. (Photo: REUTERS/Pawan Kumar).

INDIA’S Supreme Court on Wednesday (16) ordered an end to hearings in a long-running dispute between Hindus and Muslims over a place of worship, laying the ground for a verdict that could lead to further divisions.

Hindus believe that the site in the northern town of Ayodhya is the birthplace of god-king Lord Ram and want a temple built on the ruins of a mosque that was torn down by zealots in 1992, triggering riots across the country.

Muslims want the 16th century mosque be rebuilt and leaders from the two sides have been arguing over the matter for decades.

“Hearing in this matter is going to be completed today,” he said.

Hindu groups tied to Prime Minister Narendra Modi’s ruling party have been agitating for a temple at the site, saying a temple existed there before Muslim invaders destroyed it and built the mosque.

Lawyers, journalists and a couple of saffron-robed Hindu monks jostled for space in the courtroom as both sides made their case over who the land should be given to, quoting historical information.

“The mosque was a symbol of slavery as it was built by a Mughal invader Babar by demolishing a holy temple,” said Sharad Sharma, spokesman of the Vishva Hindu Parishad, a Hindu nationalist organisation. He said he was confident of a verdict in favour of the Hindus.

Gogoi is expected to announce a verdict next month.

Ahead of the court decision, local authorities banned gatherings of more than four people across Ayodhya town to prevent a trouble between majority Hindus and Muslims who make up 12 percent of the population.

Thousands of people have died in riots that have erupted over Ayodhya over the years.

“We have made our submissions, now whatever happens is in the hands of the almighty,” Zafaryb Jilani, a lawyer representing the All India Muslim Personal Law Board, said.