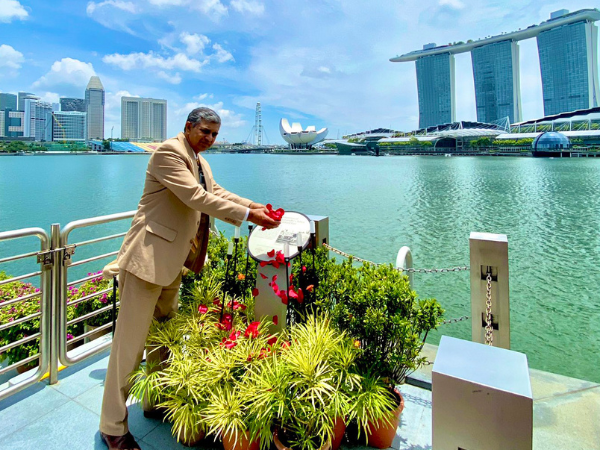 Singapore’s efforts to strengthen India’s connect with the Association of Southeast Asian Nations (ASEAN) will further New Delhi’s Act East policy as well as the shared commitment to international law and stability in the Indo-Pacific region, the Indian envoy in the city-state has said.

P Kumaran, India’s high commissioner in Singapore, made these remarks at a reception hosted aboard the INS Saryu docked at Singapore’s Changi Naval Base, complementing the Indian high commission’s 75 years of India’s Independence Day celebrations in the country.

Addressing the event, Kumaran said: “I am sure the ship’s crew had useful exchanges during their short stay in Singapore with their professional interactions with the Republic of Singapore Navy.”

India has always believed in such professional engagements to improve cooperation and understanding between various parties and joint missions in the complex maritime environment, he said.

“As we work together closely, Singapore’s efforts to strengthen India’s connect with the ASEAN (Association of Southeast Asian Nations) only underline the mutual commitment and further India’s Act East policy as well as the shared commitment to international law and stability in the Indo- Pacific region,” said the high commissioner.

India’s Act East Policy focuses on the extended neighbourhood in the Asia-Pacific region. India has deep and cultural linkages with the ASEAN region and these have been strengthened in recent years to vibrate the economic engagements, Kumaran said.

The envoy highlighted India’s active and positive contribution in numerous ways to the South East Asian region such as the ASEAN Regional Forum and the ASEAN Defence Minister Meeting Plus as well as India’s support for the strengthening of the East Asia Summit.

During the reception, diplomats from friendly countries and guests participated in an energetic “Bhangra” at the dockside. The ship’s Jazz band played popular numbers. On Independence Day, the INS Saryu crew and band as well as a contingent from Tri-Services of the Indian Armed Forces joined the High Commissioner in hoisting the Tricolour at the Chancery.

INS Saryu arrived in Singapore on Sunday (14) from Port Blair and will sail home on Wednesday (17).