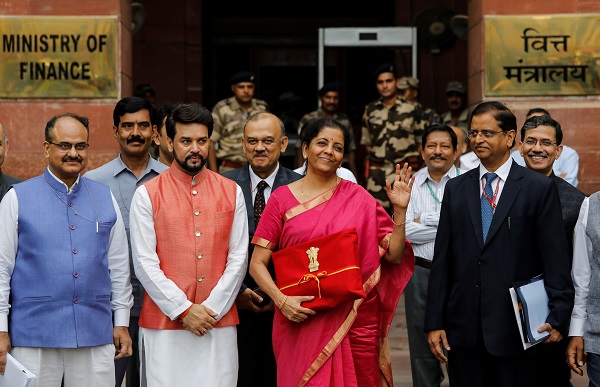 India’s Finance Minister Nirmala Sitharaman (C) gestures during a photo opportunity as she leaves her office to present the federal budget in the parliament in New Delhi, India (Photo: REUTERS/Anushree Fadnavis).

INDIA on Friday (5) unveiled a budget aimed at boosting infrastructure and foreign investment, the first since the Bharatiya Janata Party (BJP) led by prime minister Narendra Modi returned for a second term in power.

Here are the highlights of finance minister Nirmala Sitharaman’s budget for the 2019-20 fiscal year that began April 1.

* Customs duty on steel raised to 7.5 per cent from 5 per cent

* To increase customs duty on gold and precious metals to 12.5 per cent

* India to invest heavily in infrastructure and job creation

* Proposes further opening up of FDI in aviation, insurance, media and animation sectors

* Important to get retail investors to invest in treasury bills

Infrastructure
* The government will upgrade 125,000 kilometres of roads over the next five years at a cost of $11.6bn.

* India will enter into aircraft financing and leasing activities.