Indian Painters To be Celebrated At UK Auction 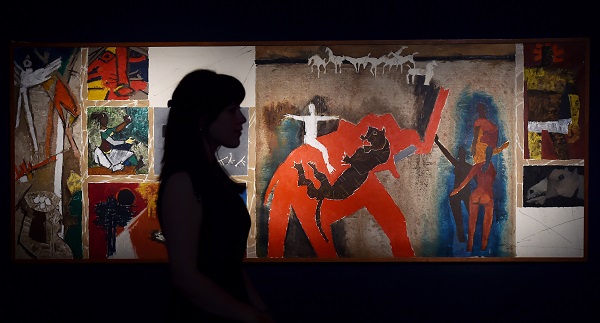 INDIAN painters such as Tyeb Mehta and Maqbool Fida Husain are among a host of modern and contemporary artists from South Asia to be celebrated at an auction in London next month.

Following India’s participation and Pakistan’s debut at this year’s Venice Biennale, this year’s auction will celebrate art from both the countries, the auction house said.

This compelling composition manifests the sense of angst, helplessness and fear that Mehta felt at the societal violence and tragedy he experienced in the aftermath of Partition,” the auction notes read.

The painting, estimated to fetch between £1,500,000 and £2,000,000, depicts entwined avian and human figures, drawn perhaps from Greek mythology characters like Icarus or Phaethon, who failed in their quests of flight and union with divinity.

The sale also includes exceptional paintings by members of the seminal Progressive Artists’ Group and their associates, which are completely fresh to the market and provide new documentation of the critical formative period in the development of the Indian modern art.

These new discoveries are described as “jewels” in the auction and highlight the touching friendships that inspired some of the Indian artists in the 1950s and 1960s on the path to becoming the major modern masters.

It is described as a “visual almanac of the artist’s early oeuvre”.

Christie’s notes: “Each constituent vignette in this multipart composition represents Husain’s most iconic tropes, quintessential to his artistic output, establishing his assured draughtsmanship and mastery of line and colour.”

According to the catalogue, the ‘Untitled (Village Scenes)’ is from a rare and seminal series of large-scale works encapsulating the charm and vibrancy of the Indian countryside creating a storyboard of the nation.

A further 1966 Husain entitled ‘Gopees and Krishna’, estimated between £250,000 and £350,000, was acquired directly from the artist by the Seventh Earl and Countess of Harewood and represents the close friendship they developed over several visits to India in the 1960s and 1970s.

They became lifelong friends and Husain visited Harewood House in Yorkshire, where the painting was exhibited in 2007 only a few years before his death, Christie’s reveals.

The auction also offers works by Sayed Haider Raza from the early 1950s, coming from the collection of his close friend and classmate at the Ecole Nationale Superieure des Beaux Arts in Paris, Lydia Lavrov-Nordentoft.

The catalogue notes: “Each painting extolls Raza’s love of his quintessential genre, landscape, in unique and contrasting ways.”

The painting is a delicate rendering of rooftops executed in gouache. These were most likely the rooftops seen from Raza’s apartment window in Paris.

The auction next month will also feature a key example of Ram Kumar’s restrained portraits of the 1950s ‘(Untitled)’ that express the artist’s despondent reaction to the harsh realities of urban life that he came face to face with at the time in France and India.

In the painting, which is estimated between £180,000 and £250,000, the central figure, a young man in a grey suit, becomes a universal symbol of this disenchantment, and sense of individualism being subsumed by the anonymous homogeneity of the city Kumar portrays him in.

The painting was acquired directly from the artist by the eminent author and critic Shamlal, who authored a series of monographs on Indian artists, known as the ‘Sadanga Series on Modern and Contemporary Indian Art’.

Francis Newton Souza’s ‘The Prophet’ was painted in 1955 at the apex of his career in London.

The painting depicts an austere anguished man dressed in a business suit, pierced by a single arrow in his neck, representing the fundamental themes of religion, sinners, saints and martyrdom.

The auction will also include the largest ever selection of modern and contemporary works by artists from Pakistan and its diaspora, spanning the period of colonial rule in the Indian Subcontinent to the present.