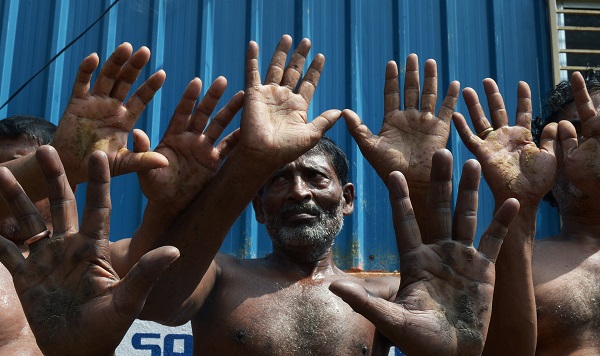 Arsenic-affected villagers show their hands next to a bottling plant set up by the Sulabh Safe Drinking Water Project in Madhusudankati village, some 60 kilometre east of Kolkata (Photo: DIBYANGSHU SARKAR/AFP/Getty Images).

RESEARCHERS in India have developed a simple and cost-effective filtration system that may help reduce the health burden caused by arsenic and iron contaminated groundwater.

Arsiron Nilogon, developed by a team led by Robin Kumar Dutta from Tezpur University in country’s Assam state, filters out 99.9 per cent of the arsenic contamination from the groundwater to make it suitable for drinking.

According to the World Health Organization (WHO), arsenic is a natural component of the Earth’s crust and is widely distributed throughout the environment in air, water and land.

However, it is highly toxic in its inorganic form, researchers said.

Long term exposure to inorganic arsenic, mainly by drinking contaminated water, eating food grown or even prepared with this water, can cause skin lesions and cancer, they said.
Several Indian states, including, Assam, West Bengal, UP and Bihar, are highly affected by the groundwater arsenic contamination.

Dutta, a faculty in the Department of Chemical Science of Tezpur University, said the filtration system is highly cost-effective and simple to operate.

“In Arsiron Nilogon, we simply create a condition in a bucket or drum of water which exists in the aquifer giving us arsenic-free water to remove arsenic by successive additions of three common chemicals,” Dutta said.

He said the chemicals used in the filtration process are cooking soda for pH conditioning, potassium permanganate for supplying oxygen and ferric chloride for providing solid iron oxide adsorbents of arsenic.

The unit can be custom-made at home at a very low cost. The doses used for twenty litres are two grammes of cooking soda, six drops of five per cent potassium permanganate and two millilitres of 25 per cent ferric chloride for removing arsenic in absence of dissolved iron.

More potassium permanganate has to be added until a purple colour remains in the water in presence of dissolved iron.

After dosing, in one to two hours, solid iron oxides settle down along with arsenic which can be filtered out using a sand-gravel or any other filter.

The residue thus gets settled leaving only clean water for use, researchers said.

The method can remove arsenic even to below 2 ppb (parts per billion) level while the WHO has set 10 ppb as the standard level.

“A household filter can be made using two plastic buckets and some other easily available materials at a cost of about Rs 350 while the recurring cost is about one paisa per litre,” Dutta said, adding he felt motivated to develop the filtration system after he lost some of his dear ones due to the problem.

With the aim to encourage people adopt the technology, the team is also training volunteers on how to install and maintain a filter using the technique.