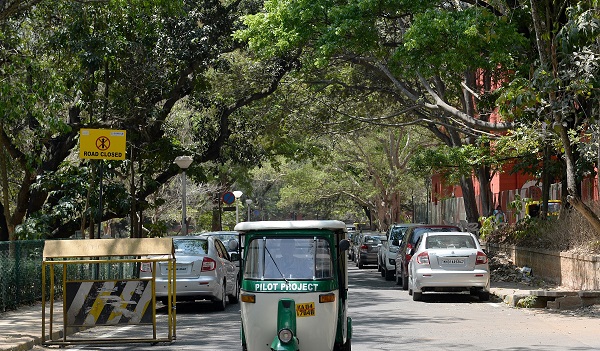 One of the biggest difficulties, he said, is that much of the water comes from the Cauvery River more than 100 km (60 miles) away. To get to Bengaluru, the water must be pumped uphill, at a cost of $6 million a month in electricity (Photo: MANJUNATH KIRAN/AFP/Getty Images).

WAITING under the scorching sun for a tanker truck to deliver water to his home, Chandra Shekhar reminisced about how his southern Indian city once brimmed with pristine lakes and lush gardens.

“They are all gone now. They have been consumed by buildings and more buildings,” said the 59-year-old retired engineer, who has seen the IT hub of Bengaluru- often dubbed India’s Silicon Valley – transform since he was a boy.

“Bengaluru has gone from being the city of lakes to the city of concrete. Because of this, all the water has disappeared.”

Years of rapid urbanisation, a swelling population and poor water management have led to drying taps, falling groundwater levels and filth-frothed lakes that can burst into flames.

Bengaluru is paying a heavy price for its success since marketing itself as a tech hub in the late 1990s and attracting top firms including Microsoft, IBM, Dell and Google.

While job opportunities have soared in the sprawling city, millions have no piped water and instead rely on an army of privately-run tankers that suck water from wells inside and outside the city and deliver it to homes.

Other families dig unauthorised private wells in search of water for drinking, bathing, laundry and other daily needs.

Even those living in long-established neighbourhoods with piped water often find water trickling, rather than gushing, from the tap.

Even as the city struggles to quench its current thirst, towering residential condominiums and glass-and-steel office blocks sprout to accommodate an inflow of migrants.

Officials admit that city authorities, unprepared for the speed of the city’s tech boom, did not adequately plan for Bengaluru’s growing water needs.

Bengaluru’s population has more than doubled to about 12 million since 2001 and is predicted to hit 20 million by 2031.

The Bengaluru Water Supply and Sewerage Board (BWSSB) is the main agency that manages drinking water – but it can provide it to only about 60% of the city.

“We have not got to some places yet, like the outer parts,” said Tushar Giri Nath, chairman of the BWSSB.

With land for water reservoirs and other infrastructure difficult and expensive to acquire, “there is some challenge to (get to) those areas – but we are trying,” he said.

One of the biggest difficulties, he said, is that much of the water comes from the Cauvery River more than 100 km (60 miles) away. To get to Bengaluru, the water must be pumped uphill, at a cost of $6 million a month in electricity.

Then, on the way to homes, more than 20 per cent is lost to leaks from old and corroded pipes and storage units, he said.

The board is adding a fifth – and likely final – pipeline from the Cauvery, aiming to give the city an extra 750 million litres a day once the project is finished in 2023, he said.

But faced with growing competition for the Cauvery’s water from other equally thirsty Indian cities, including Chennai, Bengaluru is also looking for other sources of water.

For now, much of the shortage is met by private traders.

In outer parts of the city such as Sarjapur and Whitefield – beyond the reach of the city water system – sprawling apartment blocks and IT parks run solely on trucked-in water.

The trucks get their supply from wells, rapidly being dug to ever deeper levels as groundwater levels plunge.

But groundwater is falling so fast in Bengaluru that the federal government last year predicted there would none left below the city, at levels possible to reach, by the end of 2020.

Vishwanath Srikantaiah, a Bengaluru-based water expert, said he thinks that bleak assessment is “an exaggeration”.

But as well operators drill deeper and deeper to find water, the price per tank has tripled over the last 15 years, according to Harini Nagendra, author of “Nature in the City”, a book on Bengaluru’s relationship with nature.

At Springfields, an upmarket residential block in Sarjapur with tennis courts, manicured lawns and sparkling pools, residents buy 50 truckloads of water – about 300,000 litres – a day to keep everything running.

Every truckload costs up to Rs 700 and prices can touch Rs 2,000 in the summer, said a member of the residents’ association who oversees Springfields’ water management.

The development’s complete dependence on private tankers means residents fear the “water mafia” – their term for the tanker bosses could cut off supplies at any time.

Tanker owners say their network of thousands of trucks provides a crucial public service in response to the government’s own service failures – and that drivers face their own problems, from worsening traffic to depleting groundwater.

One tanker company owner said this year he had to dig a borehole well nearly 2,000 feet (610 m) deep – about 10 times deeper than a decade ago – to ensure enough water for customers.

“What is happening now is groundwater mining, not extraction,” with supplies unlikely to recover, said Avinash Mishra, lead author of a study published last year by the National Institution for Transforming India.

The study by the government-run policy think tank found that India, Asia’s third-largest economy, was “suffering from the worst water crisis in its history”.

“If you are going this deep, you will be extracting oil soon,” Mishra said.

Mishra, who is working on a follow-up report on water in India, said a “business-as-usual attitude and lack of political will” threaten Bengaluru’s ability to deal with growing water threats.

The South African city of Cape Town’s countdown in 2017 to a “Day Zero”, when taps were predicted to run dry, highlights the risks that lie ahead for many Indian cities, he said.

Bengaluru software engineer Roshan Srivastava, who pays up to Rs 3,000 a month for water from tankers for his flat, predicted that “we may end up like Cape Town in the near future”.

“It is quite alarming,” said the 27-year-old, preparing for his night shift at IT services firm Wipro Ltd in Sarjapur.

“This isn’t really a sustainable model. How long can we live like this?”

But changing Bengaluru’s dysfunctional water system, with its limited infrastructure and vested interests, is likely to prove difficult.

Likith R. heads the Sree Balaji Fabrication Works, where his workers make about 15 truck-mounted water tanks each month, charging up to Rs 350,000 each.

“Business is good, but as a citizen, I’m really petrified about the water situation here,” said the 22-year-old, raising his voice above the din in his welding workshop.

As city wells dry up, tanker operators dig deeper, then head out to rural pockets to “suck those areas dry”, he said.

“It’s scary to think about, because I don’t really know what the future holds for our children,” said Likith, who earned a master’s degree in business.

While Likith’s business booms, that of M. Raju – one of 50 laundrymen at Bengaluru’s dhobi ghat, an open-air laundromat is feeling the pinch of water shortages.

With less water available, workers can only accept a limited number of clothes, sheets and towels from customers, he said.

Nearly a decade ago, one main borehole produced plenty of water for their needs but that dried up in 2011, Raju said.

A local legislator installed two more wells, but one ran dry by 2014, leaving them with a single working well.

“We have a water problem here,” said the 40-year-old, who has been a washerman for 25 years, following in his father’s footsteps. “My children cannot do this job. This profession will end with me.”

For now, he is pinning his hopes on good monsoon rains.

Apart from the Cauvery, the monsoon has been a principal source of water for Bengaluru. But with climate change bringing more volatile rainfall, the once-reliable showers are increasingly irregular, environmentalists say.

One of Bengaluru’s problems is a lack of water storage.

Monsoon downpours take just minutes to spurt through Bengaluru’s overburdened pipes and onto the streets.

The city floods rapidly because only 4 per cent to 9 per cent of its rainfall seeps into natural aquifers that hold water underground, said Srikantaiah, the Bengaluru water expert.

Bengaluru was built around a series of lakes that acted as rainwater reservoirs and recharged the aquifers, providing a renewable source of water.

But the lakes have been under attack by urbanisation, encroached by real estate projects and left foaming and frothing as toxic effluents, sewage and trash produced by industries and homes fill them.

Bellandur Lake, the city’s largest, often bursts into flames and sends plumes of black smoke into the sky. Other lakes have been covered by tarmac and concrete to make way for more buildings, and some have simply dried up.

But efforts to restore some city lakes are now underway.

Srikantaiah is also pushing for the creation of a million small recharge wells dug throughout the city, to capture monsoon runoff and channel it into aquifers.

About 100,000 such wells – old and new – already exist in the city but expanding the system could provide as much water for Bengaluru as the Cauvery does, he believes.

In a water-short city, “every household can contribute to the solution”, he said.

Since 2009, Bengaluru’s water board has run campaigns to promote rainwater harvesting, making it mandatory for all residential complexes to have built-in systems to catch rain.

But, despite tens of thousands of fines levied, less than 10 per cent of Bengaluru’s rainwater is harvested, according to Ammanaghatta Rudrappa Shivakumar, a rainwater harvesting expert at the Indian Institute of Science.

He blamed the problem on a lack of incentives for residents to save water. Government subsidies on piped, bottled and tanker water – designed to ensure that the poor can cook and clean – mean buying 1,000 litres usually costs residents less than $1.

“Make me the chief minister for six months and I will change everything,” he said.