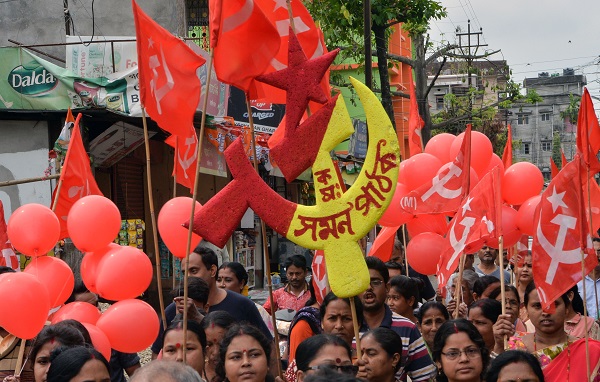 INDIA’S once-vibrant communist parties are in danger of falling off the political map in this month’s general elections as voters lose their revolutionary fervour.

From 61 parliamentary seats and a key role in a coalition government formed in 2004, the Communist Party of India (Marxist) and its hard left allies slumped to just 10 seats in the 2014 election.

CPM leader Sitaram Yechury acknowledged that the left cannot afford another fall as he lobbied for precious votes in the last communist bastion of southern Kerala state.

In the past, tens of thousands of Indians turned out for communist rallies, chanting proletarian slogans and wearing a hammer and sickle neck chains with their Marxist-red t-shirts and hats. But today, the movement is fighting an increasingly desperate battle.

As the communists defend their six seats in Kerala, Yechury acknowledged the critical stakes while keeping up his onslaught against prime minister Narendra Modi and his Bharatiya Janata Party (BJP).

“The youth were led away by a lot of illusions,” he said of the erosion of support for the communists.

“The neo-liberal blitzkrieg agenda will become an Eldorado and reality will hit them,” the party secretary-general predicted.

Yechury said the financial crisis of 2008 has made many people look to the left again.

“This is the first chance when we can test whether we are reversing the trend or not,” Yechury said.

“The 2019 election results are important for communists just as they are important for India since the results will decide whether we remain a secular, democratic republic as defined by our constitution, or not.”

The original Communist Party of India (CPI) is one of the world’s oldest communist parties and became a powerful force after independence in 1947, claiming to fight for the country’s army of poor.

Even though it was pushed back to second fiddle status when the CPM broke away in 1964, it remains one of a plethora of rival left groups, including four Revolutionary Socialist parties with tendencies ranging from Bolshevik to plain vanilla Marxist.

Between them, the parties claim more than one million members.

But political and personal infighting and the rise of the BJP as India became richer has overshadowed talk of a proletarian uprising.

The communists lost their other bastion in the eastern state of West Bengal in 2011 after 34 years in power. The small northeastern state of Tripura went over to the BJP last year, leaving just Kerala.

The CPM manifesto is like a throwback to the 1960s, saying Modi has reduced India to a “junior partner of US imperialism”.

But it includes potential vote-winners like tripling the minimum legal wage of Rs 18,000 a month and free healthcare for all.

And the communists still have diehard supporters in the southern state which has some of India’s best social indicators for health and education.

Student Ajith K rode his motorbike for three hours from his village in Kasargod district to attend a Yechury rally in Vadakara.

“My parents, brother and others in the family are all lifetime communists. We couldn’t think of voting for anyone else,” Ajith, flanked by two friends wearing red hats with the CPM hammer and sickle logo.

AN Shamseer, a CPM lawmaker in the state assembly, proudly told how the communists in Kerala “have a long history of driving key social reforms”.

But the BJP, Congress and other social democratic parties are also promising better health care, education and social welfare for the poor.

In a new sign of the communists’ vulnerability, one of the two constituencies where Congress leader Rahul Gandhi is standing for election is in the Kerala seat of Wayanad against a communist candidate.

“Kerala is their bastion, the last stronghold, where the communists need to fight,” said Hartosh Singh Bal, political editor of The Caravan magazine.

“It is a very very critical election for their future.”

Bal said “many voters want classic left-of-centre policies, which some parties offer, but not the Marxism, which the party’s cadres want. And the results are there for all to see.”