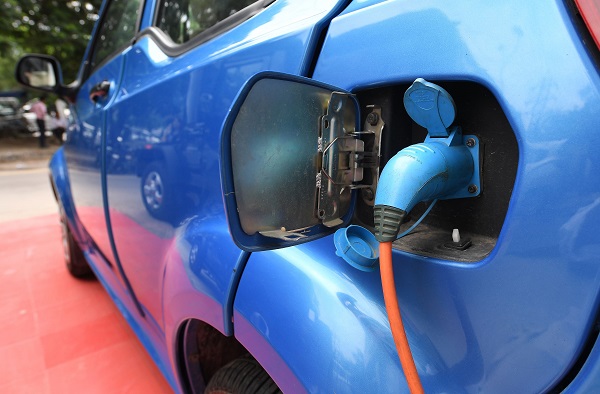 Last month, in the face of a backlash by Indian automotive giants, a government think tank indicated the electric vehicle switch may focus first on two-wheeled vehicles and motorised rickshaws, with a potential deadline as early as 2023 (Photo credit should read PRAKASH SINGH/AFP/Getty Images).

PARITOSH MITRA, who drives a motorised rickshaw in Delhi, knows what he wants next and has saved Rs 100,000 ($1,390) to get it: an electric rickshaw.

But he won’t buy one until it comes with all the basic features that he needs as a commercial driver. That includes a top speed of at least 40 kilometres (kms) (25 miles) per hour and convenient recharging.

“There are the e-rickshaws plying the streets now but they are battery operated and have very little speed, so it is of no use to us,” Mitra said.

“Also, they need six hours to charge the battery at home and with that they can only move about 50 kms, whereas we need to move up to 150 kms per day,” he said.

“We need charging points where machines can be charged in 15 minutes.”

He’s persuaded electric vehicles will cost less to run than using the current diesel or compressed natural gas as fuel – but he’s not making the switch just yet.

India’s government is pushing hard for a conversion to electric vehicles, to combat worsening pollution in cities and meet the country’s commitment to cut its climate changing emissions.

The nation’s transport minister in 2017 called for a full switch to electric vehicles by 2030 – something auto manufacturers have protested as too difficult, though the announcement also has ignited a rush to manufacturing everything from electric motorcycles to cars.

Last month, in the face of a backlash by Indian automotive giants, a government think tank indicated the electric vehicle switch may focus first on two-wheeled vehicles and motorised rickshaws, with a potential deadline as early as 2023.

Still, for now, the road to a rapid switch to electric vehicles remains a bumpy one.

Among those most interested in new electric vehicles are drivers of Delhi’s ubiquitous motorised rickshaws, who hope the new vehicles could help them avoid rising fuel prices.

Families worried about air pollution – India has 15 of the most polluted cities in the world, including New Delhi – also are looking for alternatives.

And foreign automobile and tech companies see India’s more than a billion people as a potentially huge market for electric vehicles, charging stations, batteries and other tech needed for an electric vehicle future.

South Korea’s Hyundai Motor Company, for instance, committed $250 million last December to build electric vehicles such as its Kona subcompact SUV in India over the next three years.

But some of India’s own auto manufacturing giants are worried about the switch.

In July, India’s government announced a tax revamp that would cut the cost of electric vehicles between 5 per cent and 12 per cent, and offer tax incentives for companies that install charging stations.

Some of the country’s auto industry leaders quickly led a delegation to the finance ministry to ask that the changes be rolled back, or that all vehicles be given the same break.

With buyers anticipating that electric vehicles will be mandatory, they said, their sales are slumping, with traditional fuel passenger car sales down 35 per cent in July compared to a year ago.

That slowdown has meant the loss of 230,000 jobs, according to data from the Society of Indian Automobile Manufacturers.

But the government said it had no plans to reduce taxes for traditional vehicles, fearing other big Indian industries could then ask for similar breaks.

For now, a few early electric vehicles are appearing on Delhi’s streets, mainly small electric cars with space for a driver and one passenger.

Satish Gupta, a retired marketing executive, drives one of them and said it suits his lifestyle – but would not work for everyone.

The vehicle is “much slower,” he said. “I can afford this because we are retired and this is perfect for me and my wife visiting friends.”

“But for my son with a family of four, this is of no use. They need a conventional motor car,” said Gupta lives in Noida, a tree-lined satellite city of New Delhi.

For potential electric vehicle users, one of the biggest challenges is recharging points.

In 2018, the ministry of power set up processes for installing charging stations but only a few are yet in place in the greater Delhi area, which has well over 20 million people.

According to the website of Tata Power – an arm of Tata Group – the company plans to install some charging infrastructure in Mumbai and Delhi but only for its own vehicles.

Japan’s Okiniwa Autotech, which manufactures electric motorcycles, similarly notes on its website that it is willing to set up a network of charging points, but only for its motorbikes.