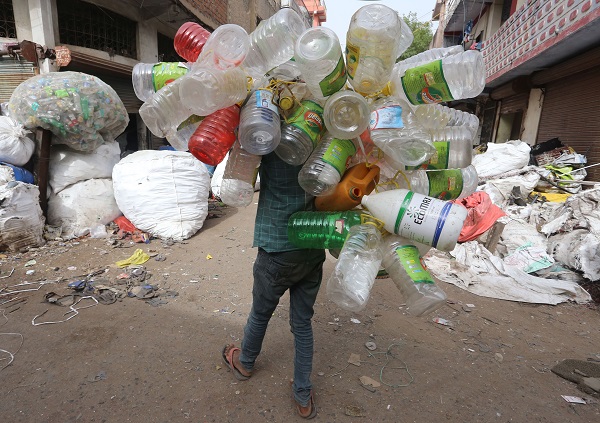 Single-use plastics are banned in many states, but Indians still generate 26,000 tonnes of plastic waste every day, according to government data. The waste is often dumped in streets, drains and landfills (Photo: AFP/Getty Images).

HUNGRY, but don’t have cash? No problem, bring plastic waste and get a free meal, said the mayor of an Indian city where the country’s first “garbage cafe” will open next month.

The small restaurant in the eastern city of Ambikapur will provide hearty food to homeless and poor people and encourage citizens to keep their streets clean, said mayor Ajay Tirkey.

“Everybody is welcome to donate plastic. The cafe will be mainly run by women… Preparations are in full swing!” he told on Wednesday (24).

Single-use plastics are banned in many states, but Indians still generate 26,000 tonnes of plastic waste every day, according to government data. The waste is often dumped in streets, drains and landfills.

The Garbage Cafe, inspired by similar cafes that have opened in countries including Cambodia and Belgium, wants to change that.

In exchange for one kilogram (2.2 lb) of plastic, the cafe will serve curry with rice, lentils, and papadams, said Tirkey, estimating that would take a couple of hours to collect.

For half that weight, punters will receive a breakfast of samosas, lentil doughnuts or stuffed flatbreads.

A waste management system set up in 2015 and run by women who go door-to-door collecting plastic for recycling, has helped make Ambikapur one of India’s cleanest cities.

The city built a road made entirely of plastic in 2015, India’s first and earns Rs 1.2 million ($17,400) a month selling plastic and recycled paper to private companies, according to Tirkey.

In a similar move earlier this year, a school in northeastern Assam state started providing free schooling to students in exchange for plastic waste.