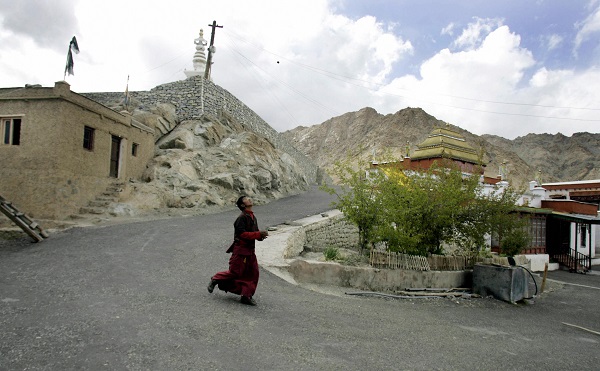 “The fact that India took this move … can be seen as one way that India is trying to counter growing Chinese influence in the region,” said Sameer Patil, a Mumbai-based fellow in international security studies at the Gateway House think-tank (Photo: PRAKASH SINGH/AFP/Getty Images).

THE Buddhist enclave of Ladakh cheered India’s move to hive it off from Jammu and Kashmir state, a change that could spur tourism and help New Delhi counter China’s influence in the contested western Himalayas.

Beijing, though, criticised the announcement, made on Monday (5) by the Indian prime minister Narendra Modi as part of a wider policy shift that also ended Jammu and Kashmir’s right to set its own laws.

In a statement on Tuesday (6), China said the decision was unacceptable and undermined its territorial sovereignty.

India and China had a two-month standoff at the Doklam plateau in another part of the remote Himalayan region in 2017.

“The fact that India took this move … can be seen as one way that India is trying to counter growing Chinese influence in the region,” said Sameer Patil, a Mumbai-based fellow in international security studies at the Gateway House think-tank.

In a statement, Chinese foreign ministry spokeswoman Hua Chunying said China contests the inclusion of what it regards as its territory on the Indian side of the western section of the China-India border.

In response to a question about Hua’s statement, Indian foreign ministry spokesman Raveesh Kumar said on Tuesday (6) the Ladakh decision was an internal matter.

Patil from Gateway House said monks he interviewed in Ladakh told him China-endorsed monks had been extending loans and donations to Buddhist monasteries in the area in an apparent bid to win influence.

By announcing it would turn Ladakh into its own administrative district, the Indian government fulfilled a decades-long demand from political leaders there.

Ladakh locals were tired of being hurt or ignored because of the many years of turmoil in the Kashmir Valley resulting from the separatist militant activity and the Indian military’s moves to crush them.

Local politicians and analysts expect the change to bring Ladakh out of the shadow of Kashmir, which has long been a flashpoint with Pakistan.

It could also help the area pocket more government funding as it seeks to build up its roads and facilities to lure tourists.

“We are very happy that we are separated from Kashmir. Now we can be the owners of our own destiny,” Tsering Samphel, a veteran politician from the Congress party in Ladakh, said on Tuesday.

He added the area felt dwarfed by Jammu and Kashmir – which is a majority Muslim area – and that the regions had little in common culturally.

In Ladakh’s city of Leh on Monday, members of Modi’s ruling Bharatiya Janata Party danced in the streets and distributed sweets.

Ladakh will be governed by a centrally-appointed lieutenant governor, handing New Delhi stronger oversight over the area.

However, while Ladakh will become a Union Territory, it will not have its own legislature – a sore point for some locals.

“Hopefully we will be getting that also, slowly,” said Samphel, 71, adding that local politicians would put that demand to New Delhi.

PC Thakur, general manager of The Zen Ladakh hotel in Leh, hopes that dissociating from Jammu and Kashmir will further attract visitors.

He expects the hotel’s occupancy to jump by up to seven percentage points from an average of around 80-85 per cent currently.

“Next year will be good,” he said.