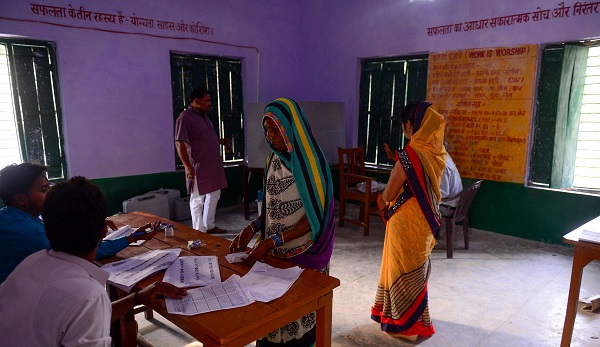 Indian voters interact with election officials at a polling station to cast their ballots during the fifth phase of India’s general election in Amethi in Uttar Pradesh state on May 6, 2019 (Photo: SANJAY KANOJIA/AFP/Getty Images).

A SMALL indigenous party is hoping to break India’s political mould by taking on bigger parties in the current general election, pledging to protect land and forest rights, and create a new state for tribal people.

The party now has India’s ruling Bharatiya Janata Party (BJP) and the main opposition Congress Party in its sights, as it looks to win more votes in the national election that will end on May 19.

“Tribal people are fed up with the big parties because they do not care for us,” said Rajkumar Roat, a former student leader who won a seat for BTP in the Rajasthan state election.

“Only tribal leaders can protect our right to jal (water), jangal (forest), jameen (land), and fight for our education and job opportunities,” he told the Thomson Reuters Foundation on Thursday.

A growing population and increasing demand for industrial projects is placing greater stress on land in India, particularly in resource-rich tribal areas.

India’s 104 million indigenous people – also known as Adivasis, or “original inhabitants” – make up less than 10 per cent of the population.

Yet they accounted for 40 per cent of people forced from their homes between 1951 and 1990, according to New Delhi-based think-tank the Centre for Policy Research.

The Adivasis’ right to land and self-governance is protected by the constitution. The Forest Rights Act (FRA), passed by the Congress government in 2006, also recognised their right to inhabit and live off forests where their ancestors had settled.

But indigenous activists say the laws have largely not been implemented, and that the BJP government led by prime minister Narendra Modi has diluted legislation meant to protect their rights.

“Our people are not even aware of the laws, and we have long been cheated of what is rightfully ours,” said Velaram Ghogra, BTP’s Rajasthan chief.

“Our land, our resources are under threat, and we are not benefiting from the projects that take our land. Our promise is to implement the laws, and to create Bhil Pradesh, a separate state for our people,” he said.

The new state would be carved out of tribal areas in Rajasthan, Gujarat, and Madhya Pradesh states, he said.

Earlier this year, the Supreme Court issued an order to remove forest-dwellers whose land claims were rejected under the FRA. There are nearly two million such claims, each potentially representing a household.

The leader of the Congress party, Rahul Gandhi, has put land and forest rights at the centre of his campaign.

The BJP alliance is widely expected to win again, but with a smaller majority, according to opinion polls.

But the BTP, which is contesting far fewer seats, has struck a chord among indigenous voters, said Madhu Sarin, a forest rights researcher.

“Their rights to land, forest and water have become even more pertinent in the context of plans to acquire large chunks of tribal lands for development projects,” she said.

The FRA could be a deciding factor in nearly a quarter of the 543 parliamentary constituencies in the national election, according to the non-profit network Community Forest Rights-Learning and Advocacy.