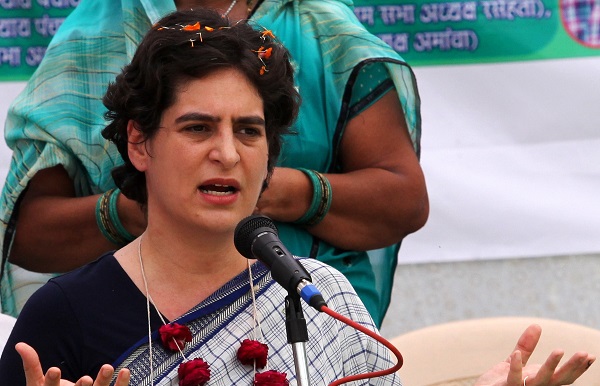 She also tagged a news report that stated that the RBI has sold its gold reserves after almost three decades (Photo: STRDEL/AFP/Getty Images).

A protest by dalits against the demolition of the temple turned violent on Wednesday (21) night, leaving several people, including policemen, injured.

Heavy police force was deployed in the area as tension prevailed after police used batons to disperse the protesters and detained Bhim Army chief Chandrashekhar Azad and 50 others.

“First the BJP government messes around with Ravi Das temple the symbol of cultural heritage of millions of dalit sisters and brothers, and when thousands of dalit brothers and sisters raise their voice in the national capital, the BJP lathi charges them, gets tear gas fired at them and arrests them,” Priyanka Gandhi said in a tweet.

“This insult of dalit voices cannot be tolerated. This is an emotional issue, and their voices must be respected,” she said.

The Ravidas Temple was demolished by the Delhi Development Authority (DDA) earlier this month on the orders of the Supreme Court.