Is PM Modi at secret understanding with Mamata Banerjee, his major rival? 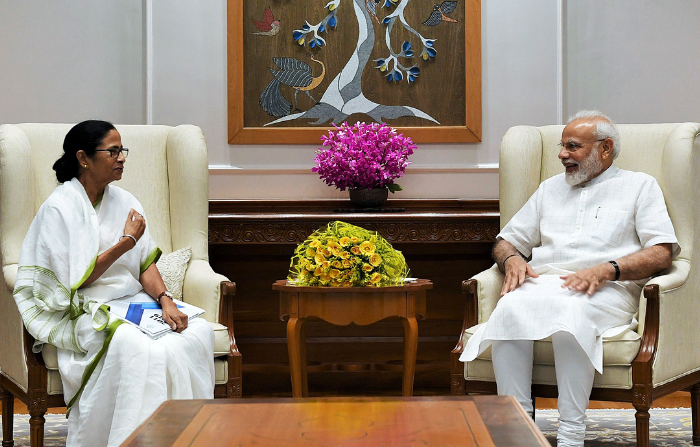 The two are known to be polar opposites in India’s political circles. While prime minister Narendra Modi initially tried to win West Bengal’s firebrand chief minister Mamata Banerjee over, the latter has always been extremely critical of the PM and his Bharatiya Janata Party (BJP), which is the main opposition party in her state.

However, there is also one school of thought that believes that all the enmity is only for display while deep inside, the BJP and Banerjee’s Trinamool Congress (TMC) are actually close to each other.

The claim came to the fore again on Friday (5) ahead of Banerjee’s meeting with Modi in New Delhi, where she reached on Thursday (4) and will remain till early next week. The leader, who at other times has gone to the national capital to knit together an anti-BJP alliance, reportedly has no agenda of meeting other anti-Modi leaders. According to some, her latest visit to New Delhi is more about saving her own back.

It may be mentioned here that a top leader of Banerjee’s party, Partha Chatterjee, was recently arrested by the Enforcement Directorate after piles of cash were discovered from the residence of one of his aides — Arpita Mukherjee. Chaterjee, who was sacked from positions in the Bengal government and party after the incident, has been accused of a major school teacher recruitment scam and the TMC leadership has found itself in a lot of discomfort.

For many, Banerjee’s meeting with Modi after the Chatterjee-Mukherjee episode is actually to make an understanding, which is called “setting” in India’s political circles. Tatagata Roy, a former governor of north-eastern Indian states such as Tripura and Meghalaya, is one among them.

The 76-year-old Roy is a hardline BJP leader from Bengal who never minces words. Of late, he finds himself more sidelined in the saffron party, perhaps because of his brutal takes, even about his own party.

On Friday (5), Roy came up with a strongly worded tweet meant for Modi in which he said, “Kolkata is agog with apprehension of a ‘setting’. Which means a secret understanding between Modiji and Mamata, whereby the thieves of Trinamool and/or the murderers of BJP workers would go scot-free. Please convince us that there wud be no such ‘setting’ @narendramodi @PMOIndia,” Roy tweeted.

Dilip Ghosh, former chief of Bengal BJP, said Banerjee uses her meetings with Modi to send out a message that “a setting has been done” after the chief minister reached Delhi.

Mamata Banerjee uses her meetings with Prime Minister Narendra Modi to send out a message that “a setting has been made”, BJP’s Dilip Ghosh alleged as the Bengal chief minister landed in Delhi for her meeting with the PM later this week.

“Mamata Banerjee uses these meetings to send out a signal that a setting has been made. The Centre should realise this and not fall for it,” Ghosh said.