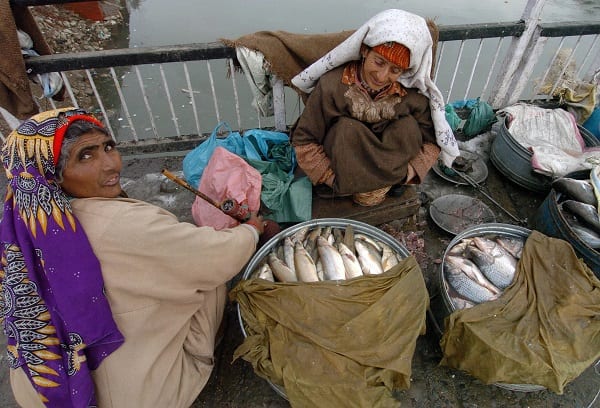 It was business as usual in the weekly flea market, which has now become a permanent fixture along the TRC-Batamaloo axis on the Residency Road after the abrogation of Article 370 provisions on August 5, the officials said (Photo: TAUSEEF MUSTAFA/AFP via Getty Images).

FOR the first time in three decades, footpath vendors of a flea market here on Sunday defied the strike call to observe October 27 as a ‘black day’ to protest against the 73rd Infantry Day, officials said.

The Infantry Day is celebrated to commemorate the operations launched by the Indian Army on October 27, 1947, to thwart the Pakistani aggression on the State.

It was business as usual in the weekly flea market, which has now become a permanent fixture along the TRC-Batamaloo axis on the Residency Road after the abrogation of Article 370 provisions on August 5, the officials said.

They said some shops were also open in the Regal Chowk and the Residency Road areas till noon, following the new routine of closing the shops in the second half of the day to protest against the revocation of the special status of the state.

While private transport was moving around normally, few cabs could be seen plying the city roads, the officials said.

The separatists have been calling for a strike on October 27 every year to protest against the landing of the India Army on the request of then Maharaja Hari Singh of Jammu and Kashmir for fighting the tribal raiders backed by Pakistan.

Although there was no strike call by separatists as most of the secessionist leaders are under detention since August 5, a complete shutdown was expected on Sunday.

The efforts of the state government to open schools have not borne any fruit as parents have continued to keep their children at home due to apprehensions about their safety.

However, authorities are making preparations for holding all the board examinations as per schedule.     While landline and postpaid mobile phone services have been restored across the Valley, all internet services continue to remain suspended since August 5.

Most of the top level and second rung separatist politicians have been taken into preventive custody while mainstream leaders, including two former chief ministers Omar Abdullah and Mehbooba Mufti have been either detained or placed under house arrest.

The government has detained former chief minister and sitting Lok Sabha MP from Srinagar Farooq Abdullah under the controversial Public Safety Act, a law enacted by his father and National Conference founder Sheikh Mohammad Abdullah in 1978 when he was the chief minister.