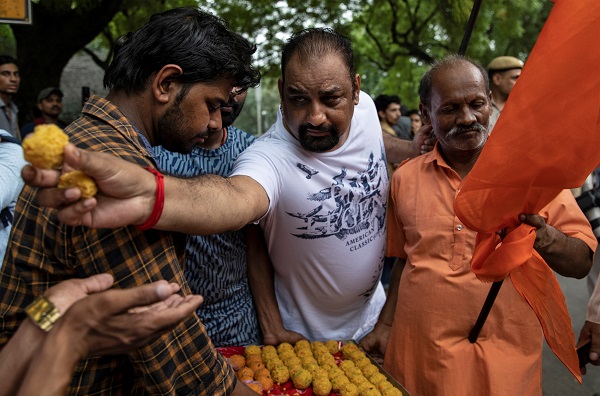 People distribute sweets as they celebrate after the government scrapped the special status for Kashmir, in New Delhi, India, August 5, 2019 (REUTERS/Danish Siddiqui).

INDIAN prime minister Narendra Modi’s Bharatiya Janata Party (BJP) leader Ram Madhav on Monday (5) hailed the government’s decision on Article 370 in Jammu and Kashmir and said the martyrdom of its ideologue Dr Shyama Prasad Mukherjee for complete integration of the state into India has been “honoured”.

The national general secretary and the party’s point person in the state said that the complete integration of Jammu and Kashmir was a long-standing demand of the nation.

“What a glorious day. Finally, the martyrdom of thousands starting with Dr Shyam Prasad Mukherjee for complete integration of J&K into Indian Union is being honoured and the seven-decade-old demand of the entire nation being realised in front of our eyes; in our lifetime. Ever imagined?”, he tweeted moments after country’s home minister Amit Shah made the announcement in Parliament.

While speaking in the Rajya Sabha, Shah moved a resolution that all clauses of Article 370 will not be applicable to the state.

“PM @narendramodi ji ne kamaal kar diya. Desh ki ummeedon pe khare utre. Many many congrats to  @narendramodi ji and  @AmitShah ji on this historic decision regarding #Article370. This has opened up the path of growth and development for #JammuAndKashmir,” tweeted party spokesperson Shahnawaz Hussain.