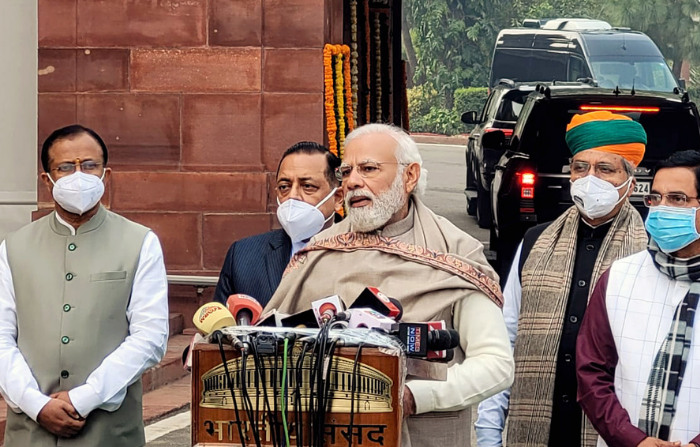 Indian prime minister Narendra Modi addresses the media ahead of the commencement of the Budget Session of Parliament, in New Delhi on Monday. (ANI Photo)

DISRUPTION of India’s parliamentary proceedings due to political disputes is not new. Waste of working hours and taxpayers’ money due to continuous ruckus in the parliament has often sparked debate over the lawmakers’ intention.

On Monday (31), as the country saw the beginning of yet another parliamentary session (budget), prime minister Narendra Modi appealed to all lawmakers across the political spectrum to make it fruitful by holding discussions with an “open mind”.

He said the budget session of the parliament is very important as the blueprint for the entire year is drawn in it. Finance minister Nirmala Sitharaman will present the national budget for 2022-23 in the parliament on Tuesday (1).

Addressing the media ahead of the session, Modi said it is true that because of frequent elections in the country, sessions and discussions get disrupted but reminded that while elections will be at their place, it is also important to ensure that free, meaningful and sensitive discussions with good intention are also held.

Modi said India has many opportunities in today’s global situation and that its economic progress, vaccination drive and indigenous vaccines have earned it trust from across the world.

In this budget session, also the “open-minded” discussions of parliamentarians can become an important opportunity for making a global impact, Modi added.

“I hope that all MPs and all political parties will definitely help in taking the country on the path of progress and in accelerating it by having quality discussions with an open mind,” the prime minister said.

Modi further said, “…I urge all members of parliament that elections have their own place and will keep happening… this budget session in a way draws a blueprint for an entire year and therefore, it is very important.”

He said the more fruitful the new session proves to be, there will be a big opportunity to take the country to new economic heights in the near future.
The budget session kicks off at a time when five states in the country are set to go to polls starting February 10.

The results will be declared on March 10.