‘Modi Criticising Nehru-Gandhi Family Has Only Reinforced Their Legacy’ 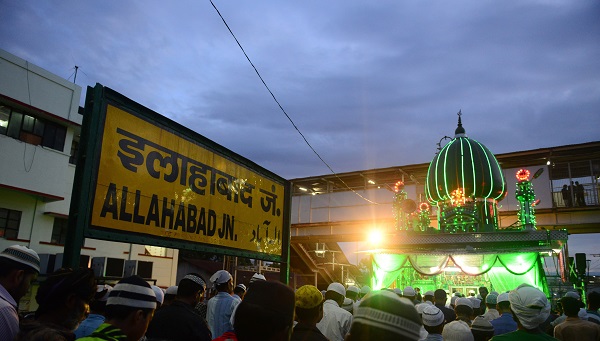 “Allahabad is the birthplace of Nehruji, his ‘janmabhoomi’ and ‘karmabhoomi’ and despite all the negative propaganda being purveyed by the BJP against him, he is still revered by a majority of people here. Nehru’s legacy is something that cannot be written away by its detractors,” said Ramji Pandey, a senior Congress leader (Photo: Sanjay Kanojia/AFP/Getty Images).

AT A TIME when the Nehru-Gandhi family is facing constant criticism from the ruling BJP, several Congress leaders in Allahabad feel that prime minister Narendra Modi and his colleagues attacking the family members for “political gains” has only “revived and reinforced” their legacy.

The twin constituencies of Allahabad and Phulpur in the district will go to polls on May 12 and a section of the Congress cadres in the holy city, also said that “abuses hurled upon Nehru” in the past few years, has only galvanised them into fighting this election with “greater resolve”.

“Allahabad is the birthplace of Nehruji, his ‘janmabhoomi’ and ‘karmabhoomi’ and despite all the negative propaganda being purveyed by the BJP against him, he is still revered by a majority of people here. Nehru’s legacy is something that cannot be written away by its detractors,” said Ramji Pandey, a senior Congress leader.

He ruled that Allahabad city’s “pluralistic essence” was getting “diminished”, alleging it was due to “communal forces” rearing its head again in the country.

“They (BJP) think that by wrongfully criticising and attacking Nehruji, Indira ji or Rajiv ji, they will be able to dent our morale. But, we thank Prime Minister Modiji and other BJP leaders for criticising them. Because, the more they do it, the more it reinforces their legacy, in Allahabad or elsewhere,” Pandey said.

Shahshi Kant Triparthi, another senior Congress leader from Allahabad, said, old-timers from the party and young members converge at city’s famous Coffee House to discuss politics, and Nehru legacy is being now being discussed by the youth party members after hearing so much criticism of him.

“We know Nehru’s legacy and the vision he had for India, a secular, prosperous nation with all-round development. But, many young party members or new entrants from the current generation, did not know much about the first prime minister, his personal life in Allahabad, but now they are reading, in books or online, thanks to Modiji,” he said.

Allahabad is considered the “mecca of politics”, a holy town by virtue of confluence of rivers Ganga, Yamuna and mythical Saraswati, and a city of great intellectuals. From Coffee House to Allahabad University, and bank managers to rickshaw-wallahas, almost every Allahabadi has an opinion on politics.

Senior Congress leader Abhay Awasthi is also not fazed by all the criticism his party and Nehru-Gandhi family is facing from the ruling BJP, over the years and especially in this election, when Modi has trained his guns at Rajiv Gandhi as well.

At an election rally in Delhi’s Ramlila Maidan on Wednesday (8), Modi had claimed that Rajiv Gandhi used INS Viraat as a “personal taxi” for a holiday with his friends and family, prompting sharp reaction from Congress, with both Congress chief Rahul Gandhi and party’s general secretary Priyanka Gandhi hitting back, daring him fight elections on real issues, like demonetisation and GST.

“Allahabad is birthplace of two PMs Nehru and Indira. It gave two more PMs from elections Lal Bahadur Shahstri and V P Singh, besides other political stalwarts. People here still understand the nuances of politics and so cannot be fooled easily, though caste equations have become one of the major factors lately,” Awasthi said.

Akshat Lal Shrivastava, a graduate of Allahabad University and president of city-based Allahabad Heritage Society, which had also unsuccessfully challenged the Yogi government’s decision last year to rename Allahabad to Prayagraj, said, Nehru had great admiration for his home town.

“I have heard so many stories about him from my father and grandfather. Even as a PM, whenever he would travel to Benaras or other cities in Uttar Pradesh, he would try to make a stop-over at Allahabad. Legend goes that, he would also spend time at Coffee House in Civil Lines. He really loved Allahabad,” Shrivastava said.

While Nehru family’s legacy is preserved in Anand Bhawan and Indira Gandhi birthplace is Swaraj Bhawan, the local Congress cadres feel enthused that Priyanka Gandhi has joined politics and is taking the party forward.

“Gauging the crowd her roadshows are attracting everywhere, we feel happy that Priyanka Gandhi has actively joined politics and her presence has injected fresh energy among the young cadres particularly. And, she hits back at BJP,” Pandey said.