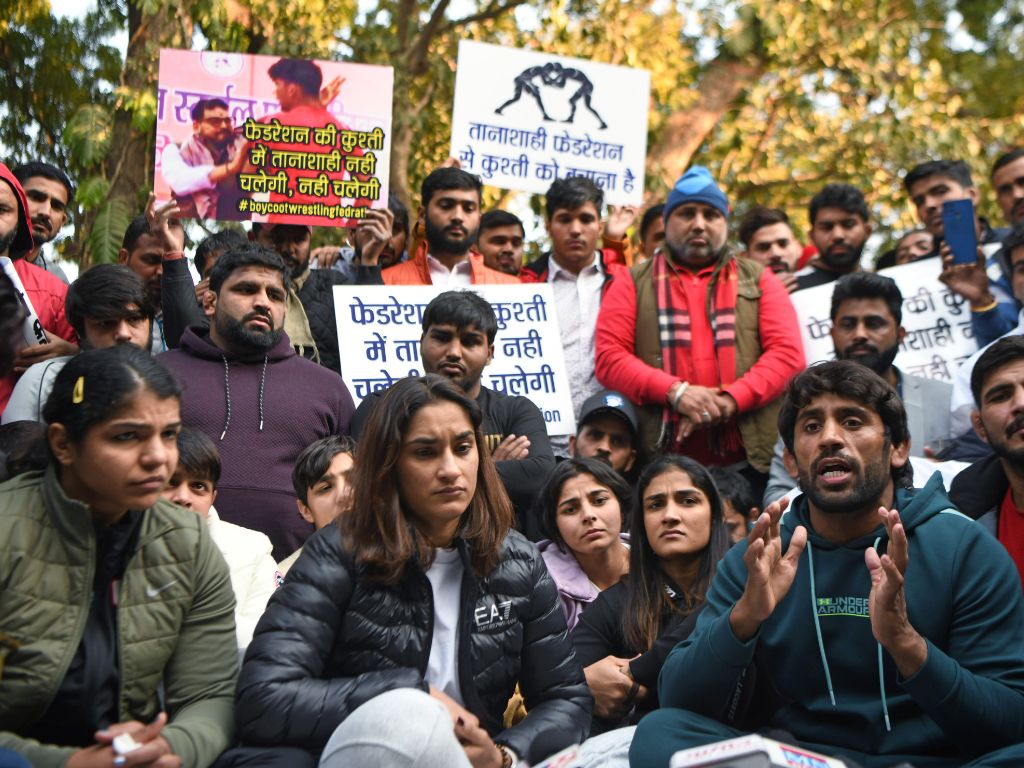 Indian wrestler Bajrang Punia (extreme right) speaks to the media during the protest against Wrestling Federation of India over its alleged harassment of wrestlers at Jantar Mantar, in New Delhi on Wednesday, January 18, 2023. Wrestlers Vinesh Phogat (C) and Sakshi Malik are also seen. (ANI Photo)

The Indian opposition Indian National Congress on Thursday (19) slammed the Narendra Modi government over the allegations of sexual exploitation against the chief of the Wrestling Federation of India (WFI), Brij Bhushan Sharan Singh, who is also a parliamentarian of the ruling Bharatiya Janata Party (BJP).

The Congress asked if this is the “better environment” for sports that the Modi government has created.

The opposition party’s attack came after India’s star wrestler Vinesh Phogat on Wednesday (18) alleged that Singh, who represents the Kaiserganj constituency in the northern state of Uttar Pradesh in Lok Sabha or the Lower House of the Indian parliament, has been sexually exploiting women wrestlers for years, a charge which was vehemently rejected by the latter.

In a tweet in Hindi, Congress general secretary Priyanka Gandhi Vadra said, “Our players are the pride of the country. They bring laurels to the country by their performance at the world level.”

The players have made serious allegations of exploitation against the Wrestling Federation and its president and their voices should be heard, she said.

In a tweet in Hindi, Congress general secretary in-charge communications Jairam Ramesh said, “The list of BJP leaders who have committed atrocities on daughters is endless. Was ‘Beti Bachao’ a warning to save daughters from BJP leaders! Prime Minister, please answer.”

“Mr Prime Minister, why are all those who commit atrocities on daughters from the BJP,” he asked.

On Wednesday, Modi said while inaugurating a sports event in Uttar Pradesh via video conferencing, “Many talents remained away from the field. But in the last eight years, the country has left behind this old thinking. Work has been done to create a better environment for sports, so now more children and youths are looking at sports as a career option.”

Phogat, who has been at loggerheads with the WFI since the Tokyo Olympic Games, also claimed that several coaches at the national camp in Lucknow have also exploited women wrestlers, adding that there are a few women at the camp who approached the wrestlers at the behest of the WFI president.

The 28-year-old, however, clarified that she never faced such exploitation but claimed that “one victim” was present at the ‘dharna’ they began at Jantar Mantar in Delhi on Wednesday.

Singh, 66, was elected unopposed president of WFI for a third consecutive term in February 2019.

Taking note of the allegations, the sports ministry has sought an explanation from WFI and directed it to “furnish a reply within the next 72 hours on the allegations made”.