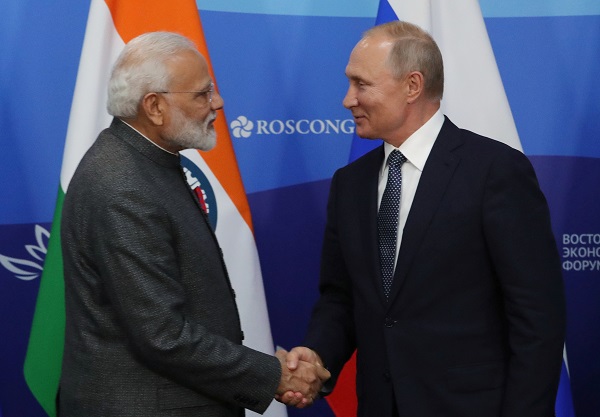 The prime minister shared the photos after he concluded talks with President Putin at the 20th India-Russia 20th Annual Summit.

On Thursday (5), he will attend the Eastern Economic Forum as the chief guest.

“While participating in the 20th India-Russia Summit today, my mind also went back to the India-Russia Summit of November 2001 when Atal Ji was PM. That time, I was honoured to be a part of his delegation as Gujarat CM,” the prime minster tweeted, along with the photographs.

In one of the photographs from 2001, Modi is seen signing a document sitting beside Vajpayee and in another he is standing with the then Indian defence minister Jaswant Singh.

Earlier, Modi said: “I had the opportunity to meet President Putin for the first time in 2001. I came to Moscow with then-prime minister Atal Bihari Vajpayee. I was the chief minister of a state (Gujarat), and this was our first meeting.

“However, Putin did not make me feel like I was less important; that I was from a small state or that I am new. He treated me amicably, as a friend. This opened the doors of friendship,” Modi told Russia’s state-run Tass news agency.

“We have discussed not only the issues related to our states; we have talked about various issues, our hobbies, global issues. We talked openly, as partners. He is a very interesting person to talk to, and I admit that we have very enlightening conversations.”

“This forum is not confined to a mere exchange of points of view. We have been gearing up for this forum for six months,” he said.

The prime minister said he is ready to make efforts to ensure that the EEF will help boost and expand economic relations between India and Russia.

“That is why I think that the Eastern Forum is a very important event,” he said.