Modi To Be Honoured By Bill And Melinda Gates Foundation 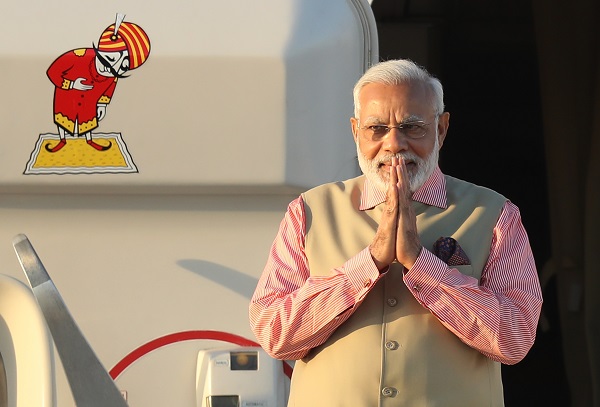 Sources told that Modi will be presented with the 2019 ‘Global Goalkeeper Award’, which according to the Foundation is a “special recognition” that celebrates a political leader who has “demonstrated their commitment to the Global Goals through impactful work in their country and/or globally” (Photo: Sean Gallup/Getty Images).

INDIAN prime minister Narendra Modi will be honoured later this month with the prestigious ‘Global Goalkeeper Award’ by the Bill and Melinda Gates Foundation for his leadership and commitment to the Swachch Bharat Abhiyaan.

The prime minister will also address global leaders and corporate executives at the Bloomberg Global Business Forum during his visit here for the high-level UN General Assembly (UNGA) session.

Sources told that Modi will be presented with the 2019 ‘Global Goalkeeper Award’, which according to the Foundation is a “special recognition” that celebrates a political leader who has “demonstrated their commitment to the Global Goals through impactful work in their country and/or globally”.

Modi will be honoured for his leadership of the Swachch Bharat Mission, which he had launched on October 2, 2014.

The ambitious mission aims at accelerating the efforts to achieve universal sanitation coverage in the country by this year as a tribute to Mahatma Gandhi on his 150th birth anniversary.

So far, 90 million toilets have been built to eliminate open defecation by October 2, 2019, and currently, 98 per cent of India’s villages have rural sanitation coverage instead of 38 per cent four years ago.

The Foundation will host the fourth annual Goalkeepers ‘Global Goals Awards’ on September 24.

The annual awards, in five categories, are presented to leaders and individuals for their efforts in achieving the Sustainable Development Goals (SDGs).

The categories are Progress, Changemaker, Campaign, Goalkeepers Voice and the Global Goalkeeper.

“These Awards tell the extraordinary stories of remarkable individuals taking action to bring the Global Goals to life and help achieve them by 2030,” the Bill and Melinda Gates Foundation said adding that this year, Goalkeepers will focus on the challenge of fighting global inequality to ensure that no one is left behind.

This year, speakers at the event include the Foundation Co-Chairs, Bill and Melinda Gates, Mohammed and UNICEF Executive Director Henrietta Fore.

Modi will be attending the high-level UNGA session that begins later this month at the world body’s headquarters.

He will address the world leaders at the 193-member UNGA’s General Debate on September 27.

The prime minister will also be the keynote speaker at the Bloomberg Global Business Forum on September 25.

Sources said after Modi’s keynote address, there will be a Q&A session with him moderated by Bloomberg LP and Bloomberg Philanthropies Founder Michael Bloomberg.

The Forum gathers global business and government leaders to discuss innovative and collaborative ways to solve the new challenges to global economic growth, the organisation said.

During his visit to New York, Modi will also inaugurate the ‘Gandhi Peace Garden’, an innovative initiative to commemorate Gandhi’s 150 birth anniversary.

Under this initiative, the Consulate General of India in New York, Long Island-based NGO Shanti Fund and the State University of New York-Old Westbury have entered into an agreement to plant 150 trees.

The garden is in an open site within the 600 acres campus of the university.

“The novelty of this initiative is that it is being financed by the people. They are planting a tree, adopting a tree in memory of their parents, guru or loved ones,” sources said.

As prime minister, Modi had given his maiden address to the world leaders at the UN General Assembly in 2014. Modi’s visit this month and the address at the UNGA will be his first after winning a second term as prime minister in a resounding electoral victory in May.
The UN General Debate will commence on September 24 and run through September 30. US President Donald Trump, who had delivered his first address to global leaders from the General Assembly hall’s iconic green podium in 2017, will address the high-level session on the morning of September 24.

The US is traditionally the second speaker on the opening day of the General Debate, after Brazil.  Before arriving in New York for the UNGA session, Modi will visit Houston where he will address the Indian-American community on September 22.

“Howdy, Modi!”, the Indian-American community mega-event, will be hosted by the Texas India Forum, Houston-based non-profit. The event is expected to be attended by tens of thousands of people as well as influential American lawmakers and political leaders.

Several high-level summits will be held on the margins of the 74th session of UNGA.

With a view to boosting ambition and accelerating actions to implement the Paris Agreement on climate change, UN Secretary-General Antonio Guterres will host the 2019 Climate Action Summit on September 23 to meet the climate challenge. Modi is expected to address this summit.