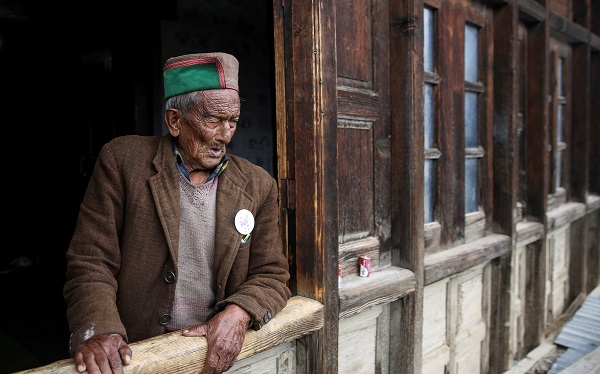 Shyam Saran Negi, 102, independent India’s first voter who has participated in all elections since 1951, looks out from his house ahead of the final phase of the general election, in Kalpa, India, May 18, 2019 (Photo: REUTERS/Cheena Kapoor TPX IMAGES OF THE DAY).

INDIA’S ruling Bharatiya Janata Party (BJP) is preparing to meet coalition partners to discuss a new government, two BJP sources said on Monday (20), after exit polls predicted a better-than-expected result for it in a general election.

The talks would most likely be held on Tuesday (21) afternoon, the two sources in the BJP said. They declined to be identified as they are not authorised to speak about the meeting.

Nalin Kohli, a spokesman for the BJP, declined to comment.

India’s seven-phase general election billed as the world’s biggest democratic exercise began on April 11 and ended on Sunday (19). Votes will be counted on Thursday (23) and results are likely the same day.

Prime minister Narendra Modi’s BJP-led National Democratic Alliance is projected to win anything between 339-365 seats in the 545-member lower house of parliament with the Congress-led opposition alliance getting only 77 to 108, an exit poll from India Today Axis showed on Sunday (19).

A party needs 272 seats to command a majority.

Indian stock markets and the rupee were sharply higher on expectation the business-friendly Modi would stay on at the helm.

The benchmark NSE share index was up 2.8 per cent, its best single day since March 2016.

“I expect another 2-3 per cent rally in the market in the next three to four days based on the cue,” said Samrat Dasgupta, a fund manager at Esquire Capital Investment Advisors.

Congress spokesman Sanjay Jha cast doubt on the exit polls, saying on Twitter he believed they were wrong.

“If the exit poll figures are true then my dog is a nuclear scientist,” Jha said, adding he expected the next prime minister would come from outside the BJP alliance.

Modi and his BJP faced criticism in the run-up to the election over unemployment, in particular for failing to provide opportunities to young people coming onto the job market, and for weak farm prices.

But Modi made national security a central theme of the campaign after a surge in tension with Pakistan in February following a suicide bomb attack in Kashmir by Pakistan based militants.

Modi ordered air strikes on a suspected militant camp in Pakistan, which led to a surge in tension between the nuclear-armed neighbours.

But many Indians applauded Modi’s tough stand and he was able to attack the opposition for being soft on security.

Ram Madhav, a senior leader in the BJP, told ANI the results would be even better for the party than the exit polls were suggesting, particularly in West Bengal state.

West Bengal has the third largest number of members of parliament and has been hotly contested between the BJP and the Trinamool Congress, one of the most powerful parties in the coalition trying to unseat Modi.

“Bengal will surprise all the pollsters, we are hoping to do extremely well there,” Madhav said.

“Everyone has seen the tremendous support for PM Modi and the BJP in Bengal.”