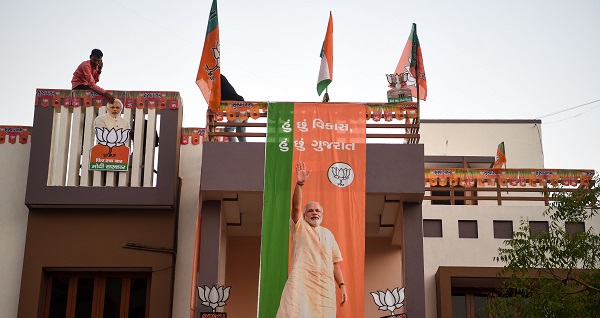 Opaque campaign financing in the world’s largest democracy makes it tricky to get a full picture of money in politics here.

But current and former BJP supporters, opposition politicians, businessmen and activists interviewed say Modi has an unprecedented advantage, thanks to support from businesses and expectations he will be the winner.

Staggered voting in the general election is currently in progress across India, with results to be declared on May 23.

The BJP war chest has allowed it to unleash a massive amount of advertising on social media and send Modi and party officials crisscrossing India to campaign.

The ruling party has showered money on Facebook and Google advertisements, spending six times more than Congress since February, according to data from the two firms. Modi merchandise abounds, as do Modi marketing sites.

The money puts the BJP in an extraordinarily powerful position, even over logistical issues like how to get its leaders to election rallies.

A Congress official said the BJP had the funds to reserve most of India’s fleet of helicopters for hire for 90 days, making it difficult for opponents to get hold of them.

“We have never ever seen an election with such disparity. Financially, we cannot compete with them,” said another veteran Congress politician, who asked to remain anonymous.

He and another high-ranking Congress official said they expected the BJP to outspend them by a factor of ten. A third Congress source estimated the disparity at twice that.

Two BJP officials declined to provide an estimate of spending, but one said the “BJP definitely has a big war chest and has more funds at its disposal than the Congress.”

Congress has received far fewer funds because of a perception it is unlikely to win the election, political strategists said. The opposition party has been hampered by its inability to forge a national alliance to take on Modi and has struggled to capitalise on discontent against the BJP over a lack of jobs and distressed farm incomes.

Modi has been topping polls as India’s most popular politician, well ahead of Congress president Rahul Gandhi.

Money has become critical in elections given the country’s 1.3 billion population, its voting over 39 days and the sheer complexity of the electorate, in terms of region, religion, language, and caste.

A tradition of doling out freebies to sway voters only adds to costs. Authorities say they have seized goods and cash worth about $456 million since March 26.

“Money is useful for wooing voters but also for keeping networks of party workers and influencers well lubricated.”

Parliamentary candidates’ expenditure is capped at up to Rs 7m, but the limit is widely flouted, and political parties are allowed to spend freely.

The New Delhi-based Centre for Media Studies (CMS) estimates almost $8.6 billion will be spent on this year’s vote, roughly twice the 2014 election.

The figure would surpass OpenSecrets.org’s estimate that $6.5bn was spent in the 2016 US presidential and congressional elections.

Recent reforms under Modi may have fueled the spending spree: Companies can fund parties anonymously through new ‘electoral bonds’ and they no longer face a donations cap.

Activists say that gives corporations too much sway and obscures ties between politicians and businessmen. About 95 per cent of electoral bonds snapped up in a first tranche offering last year went to the BJP, according to data reviewed through a Right To Information request and BJP filings.

When asked whether the BJP had a financial advantage, party spokesman Anil Baluni said “it is not an unfair advantage.”

“I guess maybe the BJP does believe in taking maximum donations by cheque or through bonds… We are the largest political party in the country,” Baluni added.

He said he did not have information on the provenance of funds or the uses.

Pawan Khera, a Congress spokesman, said this was “turning out to be the most unequal election,” but did not provide specifics.

Modi was elected in 2014 as a darling of the business community. His star has dimmed somewhat, in part due to fallout from a shock 2016 decision to scrap then circulating high-value bank notes, but with some businesses wary of a fragile opposition coalition coming to power, Modi retains backers.

Still, business titans tend to give to several parties to hedge their bets, politicians and executives say. Mukesh Ambani, Asia’s richest man and the boss of the Reliance Industries conglomerate, hails from Modi’s home state of Gujarat and his family has praised the prime minister publicly.

Ambani even splashed Modi’s face on advertisements for the Reliance Jio telecoms launch in 2016.

But last month, Mumbai-based Ambani endorsed Congress candidate Milind Deora, appearing in a video saying “Milind is the man for South Bombay.” Deora’s politician father was a close friend of the Ambanis.

Under the electoral bond scheme announced by finance minister Arun Jaitley last year, individuals and companies can anonymously buy as many bonds as they wish to in denominations ranging from 1,000 rupees to Rs 10m and deposit them in a party account at the State Bank of India (SBI).

Activists say the opposite is true.

“If you do not know the donor and you do not know who the money is given to, where is the transparency? Dubious donations are now legitimised,” said Jagdeep Chhokar, a founder of the Delhi-based Association for Democratic Reforms.

When reporters visited SBI branches during bond sales in Delhi and Mumbai this year, a handful of men who described themselves as politicians or company representatives were waiting to open bank accounts or buy bonds. SBI officials declined to provide details on the sales.