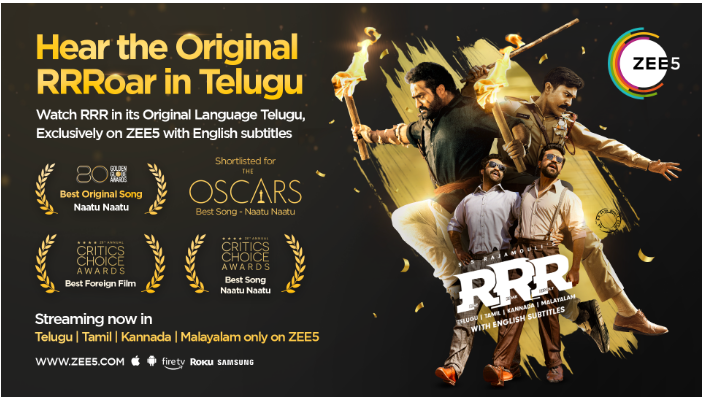 The RRRoar gets louder. Days after the coveted Golden Globe win, the SS Rajamouli creation continues to script history with its latest wins at the prestigious Critics Choice Awards (CCA), winning Best Song, for M.M. Keeravani’s Naatu Naatu and Best Foreign Language film at CCA. This follows its recent win at the LA Film Critics Association in the Best Music category for Naatu Naatu.

Exclusively available on ZEE5 Global (www.zee5.com) across the US, UK, Canada, MENA, and other international markets in the Original audio language Telugu, the magnum opus is an absolute must-watch for anyone to get the most authentic feel of the film’s power-packed action and riveting storyline. With English subtitles making it an easily accessible watch, the film is also available on the streaming service in Tamil, Malayalam, and Kannada.

Archana Anand, Chief Business Officer, ZEE5 Global, said, “ZEE5 Global has always been at the forefront of taking real and authentic stories from South Asia to the world. It now gives us great joy to see the love pouring in for the film with RRR’s historic wins at multiple prestigious global awards. The authentic flavour of the movie comes alive only in the Original language Telugu version which is streaming on ZEE5, and is an absolute must-watch for viewers across the globe to experience the film’s true essence first-hand.”

RRR’s winning streak marks a new era for South Asian entertainment. In 2022 alone, the film amassed 1000 Million streaming minutes in the first 10 days of the launch on ZEE5, trending #1 in all 4 languages. It became a humongous hit not only in India but all across the globe.

RRR’s win also comes on the back of a significant rise in consumption of South Indian language content in recent months across platforms and especially on ZEE5, led by Telugu and Tamil hits content on the back of other blockbuster hits like Karthikeya-2, Valimai and others.