My Playlist With Project Mishram 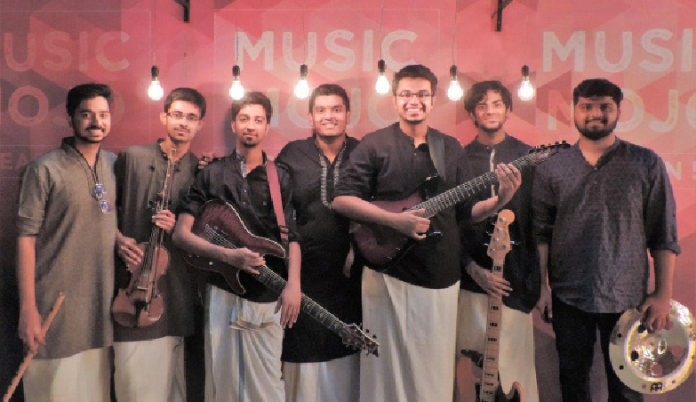 The rapidly-rising stars are performing in the UK this summer, including being a headline act at the Croydon Mela on July 14.

Eastern Eye got them to select 10 songs they love.

Nocturne by TesseracT: A band that has inspired us for its weaving time signatures and eloquent melodic layers. Nocturne is a beautiful example of heavy meets rhythmic meets melodic masterpiece. It effortlessly blends ideas that are complex in nature to tell a unifying story with masterfully penned lyrics that elevate the track to another level.

Flintstones by Jacob Collier: Incredible, rich and thoughtful harmonies give a well-known childhood classic a superb twist. Collier is a genius and pushes your belief over a cliff as his thinking shines through bombastic, subtle arrangements. Words really don’t do justice to this cover, and it’s just the gateway to Collier’s world.

Javali & Shayari by Varijashree Venugopal: Varijashree leverages her incredible voice to bridge two unique styles of poetry and music from India. Subtly arranged, you start to spot the similarities amid the myriad of contrasts, and it all comes together beautifully.

Mortal Man by Kendrick Lamar: The curtain call to arguably the magnum opus of hip-hop’s revolutionary marriage with jazz music and spanning 10 minutes in length, this track has just about everything. Jazz-laden and angsty verses from Lamar segue into an ‘interview’ with hip-hop legend the late great Tupac Shakur is the icing on the cake. In the song, where Tupac and Kendrick touch on issues that are just as relevant today as they were in the previous millennium.

Vande Bharatambe by Thrissur Brothers: This song is a living, breathing masterpiece of fusion. The sheer class and carnatic might that Thrissur Brothers bring to this track are something to behold. Set to the ever beautiful raga Reetigowla, this song combines the gossamer melody of the raga with sublime, intricate instrumentation by the rest of the band to create a work of art that you will find yourself going back to.

Make It Bun Dem by Skrillex & Damian Marley: Dubstep dad Skrillex pulls no stops in a piece that takes elements from reggae and spins it backwards with his wubs. Non-stop movement from the first second with a catchy drop and vocals delivered in the typical reggae style resulted in a piece we keep coming back to since its release in 2012.

Ka Va Va by TM Krishna: TM Krishna delivers a Varali to die for, decked in Papanasam Sivan’s majestic lyrics. Striking, deep and cathartic, this Carnatic piece has received many interpretations, and while every last one of them is worth the listen, Krishna sings it like it was made for him.

Oora Paaru by Funktuation: Fresher than a filter coffee at sunrise, modern funk takes a sharp left turn at Adyar and becomes this song. Benny Dayal gives the piece a bustling, hip character and this song found itself blasting through our speakers time and again.

Gudugudiya Sedi Nodo by The Raghu Dixit Project: A heady, catchy song delivered by Raghu’s rich, distinctive voice, had us ‘hooked’ the moment we heard it. A staple among the fans of Indian fusion, you can’t complete a list of our favourites without this one.