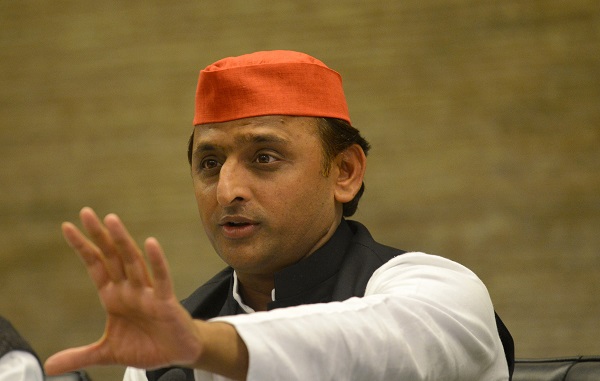 Chief Minister Yogi Adityanath has claimed in the past that the state is moving towards the ideal of “Ramrajya”.

“They say there is Ramrajya in the state. Yeh Ram ko dhoka hai. It seems they have learnt from Ravan and that is why they are working as Kalyugi Ravan,” Akhilesh Yadav said in an interview to PTI.

He claimed Adityanath has failed on all fronts and development taken a backseat.

“I can’t call him Yogi as his behaviour is against what Lord Krishna has preached in the Gita,” Yadav said.

“Had there been an institution where a complaint can be registered for using the term ‘yogi’, I would have been the first one to do so as he cannot provide justice to the people.”
Citing an alleged fake encounter in which a Jhansi man Pushpendra Yadav was shot dead by police, Yadav said, “Anyone can be killed in this regime. There is no law and order. The police are killing the innocent and the government, instead of punishing them, is shielding criminals.”

Incidents of crime, particularly rape and murder, have increased, he alleged.

“The BJP is ruling by creating terror. Those who raise their voice against misdeeds are silenced. Corruption has increased manifold and there is no development work going on the ground due to which all sections of society are aggrieved,” he said.

He referred to the recent murder in Lucknow of the leader of a little-known Hindtuva outfit.

“The CM has met the family members of slain Kamlesh Tiwari. What did they get? The mother is not satisfied with the probe. Hope the CM listens to what she is saying,” he said.
About the SP preparations to counter the BJP in the 2022 assembly polls, Yadav said, “Our party is all geared up and has emerged as the only hope of the people, who are realising their mistake of choosing the BJP.”

“We talk of development and our cadre will move ahead with this agenda,” he added.

He ruled out an alliance with the Congress, the Bahujan Samaj Party or any other group.
“(Assembly) elections are far but our party men are not in favour of an alliance. We don’t intend to stitch up alliances,” he said.

The SP-BSP alliance ahead of the Lok Sabha elections unravelled soon after the results were declared.

On a possible patch-up with his feuding uncle Shivpal Singh Yadav, who founded Pragatisheel Samajwadi Party (Lohia), Yadav denied any such move.

Asked if his party is withdrawing its disqualification petition against Shivpal Yadav from the state assembly, he said, “We have given the petition. It’s up to the assembly Speaker to decide. We are not withdrawing it.”

The move to withdraw the petition had triggered speculation that the Shivpal Yadav may come back to the SP-fold.

On Monday’s bypolls for 11 assembly seats in UP, Yadav predicted that the number of votes for the BJP will go down, “despite their having used all tricks and the blatant misuse of official machinery”.