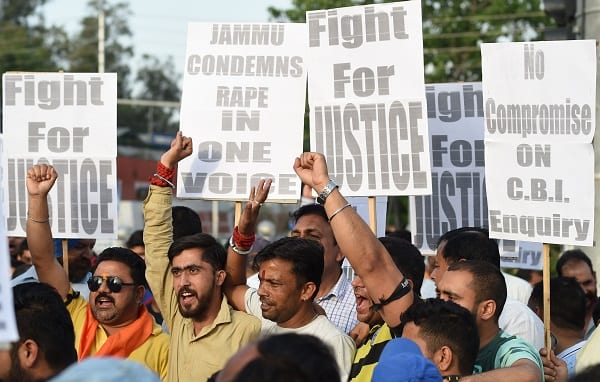 The court order is being examined and all necessary action will be taken, Singh told reporters during a briefing about an encounter in which three terrorists were killed in Tral, south Kashmir (Photo: SAJJAD HUSSAIN/AFP/Getty Images).

DEFENDING the team that probed the Kathua rape and murder case last year, Jammu and Kashmir police chief Dilbag Singh on Wednesday said no witnesses were tortured and the court’s directive of an FIR against the investigating police officials would be followed.

The police chief’s comments came a day after a Jammu court directed police to register an FIR against six members of the Special Investigation Team (SIT), which probed the case of the rape and murder of an eight-year-old in Kathua, for allegedly torturing and coercing witnesses to give false statements.

The court order is being examined and all necessary action will be taken, Singh told reporters during a briefing about an encounter in which three terrorists were killed in Tral, south Kashmir.

He also made it clear that every FIR is not necessarily based on facts. “Sometimes there is an aim, motivation and the Court’s direction came and we will see. We investigate thousands of cases. We have more than 17,000 cases registered every year.

“It does not mean that we pick up people and torture them. So there are cases, high-profile cases, where people resort to this kind of actions and reactions. We will certainly take action as per law and there is nothing to worry about,” he said.

The Jammu court was hearing an application from Sachin Sharma, Neeraj Sharma and Sahil Sharma, friends of one of the accused, Vishal Jangotra, who was subsequently acquitted.

The court directed that an FIR be registered against then SSP R K Jalla (now retired), ASP Peerzada Naveed, Deputy Superintendents of Police Shetmbari Sharma and Nissar Hussain and Sub-Inspectors Urfan Wani and Kewal Kishore. It also asked the SSP (Jammu) to give a compliance report by the next date of hearing on November 11.

Sources in the police force said an application quashing the lower court’s order would be moved before the Jammu and Kashmir High Court soon.

The Kathua rape and murder case ended with the conviction of six people, including the main accused Sanji Ram and dismissed Special Police Officers Deepak Khajuria and Parvesh Kumar who were sentenced to life imprisonment. Three dismissed policemen Anand Dutta, Tilak Raj, and Surender Verma were sentenced to five years in jail.