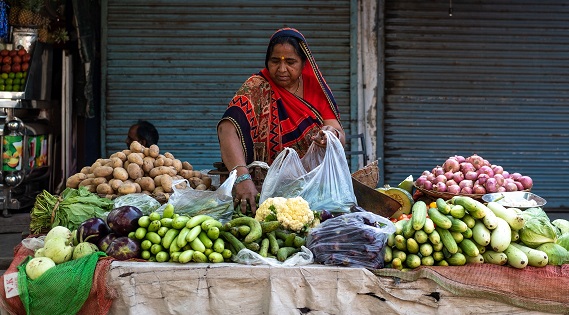 An Indian woman arranges vegetables for sale on a cart at a roadside in New Delhi (Photo: LAURENE BECQUART/AFP/Getty Images).

WITH poor diet now topping smoking as a health hazard, the world must put good nutrition over empty calories, especially in emerging Asian economies, according to the winner of a prestigious global prize dubbed the ‘Nobel for food’.

Seed breeder Simon Groot, an octogenarian whose family has cultivated seeds for hundreds of years – said the world must tackle malnutrition by boosting vegetable and crop varieties.

This was particularly pertinent in Asia, he said, as it was growing in wealth and its people were increasingly opting for starchy, high-calorie rice and meat over nutritious vegetables.

Poor diet has overtaken smoking as the world’s biggest killer, according to the latest Global Burden of Disease study, causing 20 per cent of deaths globally in 2017.

“As populations become more wealthy and as the standard of living goes up, particularly in the rural areas, they start eating more rice, which nutritionally is not a very good thing,” said Groot, founder of Dutch East-West Seed.

“It’s really happening in Myanmar now, where income is going up. And it’s happened in China where they are moving towards more meat consumption,” he said.

Its people eat an average of 155 kilogram of rice a year, according to a 2016 survey by the country’s rice federation and Yezin Agricultural University, ensuring Myanmar has one of the world’s highest rates of rice consumption.

Experts say if the world is to fight a growing malnutrition crisis, agriculture must shift from producing calories, through staples such as rice, to growing nutrients, such as fruits, nuts, vegetables and pulses.

It is a fight that Groot has waged for more than 40 years, having helped millions of small-scale farmers in Asia grow nutritious vegetables to improve their livelihoods.

Groot, whose work has since expanded to Latin America and Africa, on Monday (10) won The World Food Prize, founded in 1986 to recognise those who advance the quality or availability of food.

“For a farmer, the reliability of the seeds is so crucial,” Groot said in an interview.

“He’s not attached to his fertiliser supplier or his pesticide supplier, but he is emotionally tied to his seed supplier because that determines the quality of his crops.”

Groot said poor yields meant that many would struggle to make ends meet, leading to poverty and poor family diets.

Millions of smallholders in Asia miss out on new, resilient seeds that could improve yields in the face of climate change, according to the Netherlands-based Access to Seeds Foundation.

Diversification could help fight malnutrition globally by bringing little-known, nutritious foods into the mainstream, which could help to withstand hostile climates and disease, said the Food and Agriculture Organization (FAO).

Groot said his organisation would keep prioritising small-scale farmers to help them grow a diverse array of vegetables, no matter what his competitors do.

“Bigger companies will say, ‘Let’s just handle the 20 main vegetables and forget about the rest,'” he said.

“That is not the way we see it. Vegetables are important just for their variety, for the variety in farming systems, in market value and in consumer interest.”

Groot is set to receive $250,000 for winning the World Food Prize, which will be celebrated in October in the US.