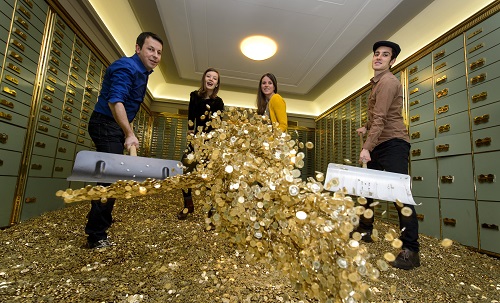 The latest such notice was issued to one Potluri Rajamohan Rao on May 28, asking him to file an appeal, if any, within ten days in connection with the ‘administrative assistance’ sought by the Indian authorities (Photo: FABRICE COFFRINI/AFP/Getty Images).

AMID a continuing crackdown on Swiss bank account holders with suspected illicit money, Switzerland has stepped up its process to share details of such individuals with Potluri Rajamohan Rao being the latest Indian national to get a notice in this regard.

At least 14 Indians, with accounts in Switzerland-based banks, were issued notices by the Swiss authorities last month, in which they have been given one last chance to appeal against sharing of their details with India.

According to officials, many more such notices are in the offing in the coming weeks as India has sought details about a large number of Indian clients of Swiss banks who are suspected to have indulged in illicit financial activities.

The latest such notice was issued to one Potluri Rajamohan Rao on May 28, asking him to file an appeal, if any, within ten days in connection with the ‘administrative assistance’ sought by the Indian authorities.

In the preceding week, at least 11 such notices were issued on a single day, May 21, to various Indian clients of the Swiss banks, as per the Swiss government gazette notifications.

Switzerland has been striving hard to re-establish its global financial centre position after clamping down on secrecy walls of its banks and there has been a significant surge in the number of cases where it has initiated the process to share information on Indians with Swiss bank accounts.

Except for his date of birth (July 15, 1951) and his Indian residency, the notification issued by the Federal Tax Administration, Switzerland, did not disclose any further details of Rao.

However, officials said Rao has been associated with various businesses in southern states of India, including in the telecom business.

An analysis of the notifications issued by the FTA, the nodal department for sharing of information on foreign clients of Swiss banks, shows that the Swiss government has stepped up its efforts in sharing such details with a number of countries in the recent months, but the surge in India-related cases is noticeable in the past few weeks.

In these notices, the individuals or their authorised representatives have been asked to file their appeals, if any, within 30 days (10 days in some cases) with necessary documentary proof to support their case against providing ‘administrative assistants’ to India, which broadly means sharing of their banking and other financial details.

While some notices were issued in April also, Switzerland had issued such notices in March to Mumbai-based Geodesic Ltd and its three directors (Prashant Sharad Mulekar, Pankajkumar Onkar Srivastava and Kiran Kulkarni), as also to Chennai-based Aadhi Enterprises Pvt Ltd, who are being probed by the Indian authorities for alleged money laundering and other financial irregularities.