Pakistan Is A Challenge For Entire World: Ram Madhav 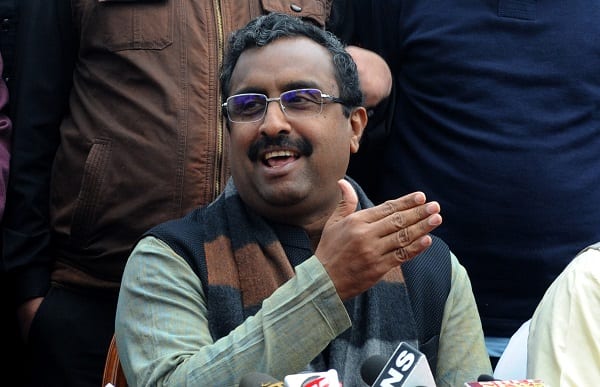 Alleging that the parties opposing the CAA were not aware of the facts of the Act, Madhav said, “They do not even make any attempt to know the facts. So they try to mislead people.”  (Photo: HABIB NAQASH/AFP/Getty Images).

DESCRIBING Pakistan as the “epicentre” of global terrorism, BJP general secretary Ram Madhav on Monday said India’s neighbour is now not only its problem but has become a “global challenge”.

Madhav said the democratic world should come together and pursue Pakistan to act again terrorism, which has become a global problem.

When asked about the relationship between India and Pakistan and scope for dialogue between the two countries, Madhav said the relationship has had its own ups and downs in the last seven decades.

India will certainly be happy to have friendly relations with Pakistan but first of all it has to address this major issue of cross-border terrorism.

“Today we are passing through a phase where Pakistan is not seen as a difficult relationship by India alone anymore…Many countries in the world see affairs in Pakistan as an issue to be concerned about especially talking about the terror infrastructure in Pakistan,” he said while speaking at a conference organised by the US-India Strategic Partnership Forum.

Madhav said there was time when countries used to advise India to have dialogue with Pakistan but today nobody is doing that, as Pakistan has become the epicentre of global terrorism.

“Pakistan is not only a problem of India anymore. Now it has become a global challenge. Terror infrastructure in Pakistan is epicentre of global terrorism. On certain issues like terrorism the entire democratic world has come together to pursue the Pakistan’s leadership to act.”.

Madhav, who also looks after the party’s affairs in Jammu and Kashmir, said the way Pakistan responded about Kashmir after abrogation of Article 370, today it “stands isolated” in front of the global community.

“But that also shows the real intention seems to be to somehow use the extraneous issues to manage the internal contradictions in the country. Pakistan government is not really serious about managing the internal affairs of the country which should be its foremost priority or obligation. It is unfortunate that such situation exists in our neighbourhood,” he said.

Talking about restrictions on Pakistan imposed by Financial Action Task Force (FATF), the watchdog for terror financing and money laundering, Madhav said it narrowly missed blacklisting but nobody knows what will happen in February 2020.