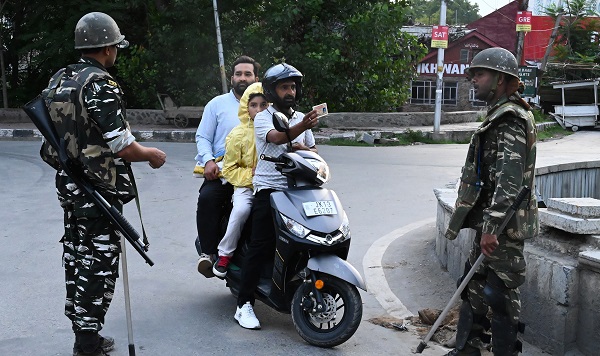 PAKISTAN has urged the international community to take note of India’s aggressive posturing about taking “physical jurisdiction” of Pakistan-occupied Kashmir, warning that such “belligerent” statements have the potential to further escalate tensions and seriously jeopardise peace in the region.

Pakistan’s statement came hours after External Affairs Minister S Jaishankar asserted that Pakistan-occupied Kashmir (PoK) is India’s part and one day New Delhi expects to have “physical jurisdiction” over it.

He also asserted that there is no need to “worry” too much beyond a point about what people will say on Kashmir as it is an internal issue on which India’s position has “prevailed and will prevail.”

Addressing his first press conference in New Delhi after assuming the office in the Modi 2.0 government in May, Jaishankar also hit out at Pakistan, saying India has a “unique challenge” from one neighbour and it would remain a challenge until that neighbour becomes a normal neighbour and acts against cross-border terrorism.

Asked about remarks by some Indian leaders that henceforth talks with Pakistan would be only about PoK and not on Kashmir, Jaishankar said, “our position has, is and will always be very clear on PoK, that it is part of India and we expect one day we will have physical jurisdiction over it.”

Reacting sharply to Jaishankar’s statement, Pakistan on Tuesday said it calls on the international community to take “serious cognisance of India’s aggressive posturing” on PoK.

Such “irresponsible and belligerent” statements from India have the potential to further escalate tensions and seriously jeopardise peace and security in the region,” Pakistan’s Foreign Office said in a statement.

“We strongly condemn and reject the inflammatory and irresponsible remarks” made by the Indian External Affairs Minister regarding Pakistan and PoK.

“These remarks are an obvious manifestation of India’s utter frustration over the continued international censure of its egregious human rights violations in Kashmir,” the statement said.

India cannot divert international attention from its crimes against the innocent people of Kashmir by blaming Pakistan, it said.

Pakistan stands for peace, but would be ready to respond effectively to any act of aggression, the statement said.

Instead of resorting to jingoistic rhetoric, India must rescind its illegal actions, stop forthwith grave human rights violations in Jammu and Kashmir, refrain from violating international law, and fully comply with UN Security Council resolutions for a final settlement of the Jammu and Kashmir dispute, the statement added.

Pakistan has been trying to internationalise the Kashmir issue but India has asserted that the abrogation of Article 370 was its “internal matter”.

Pakistan Prime Minister Imran Khan has vowed to raise the Kashmir issue at the UN General Assembly session in New York on September 27. Prime Minister Narendra Modi is also scheduled to speak on the same day.

At his press conference when asked whether there could be a possibility of the leaders of India and Pakistan meeting on the sidelines of the UNGA, the external affairs minister commented, “just look at the climate of the relations right now, I think that itself should give you the answer that you are looking at.”