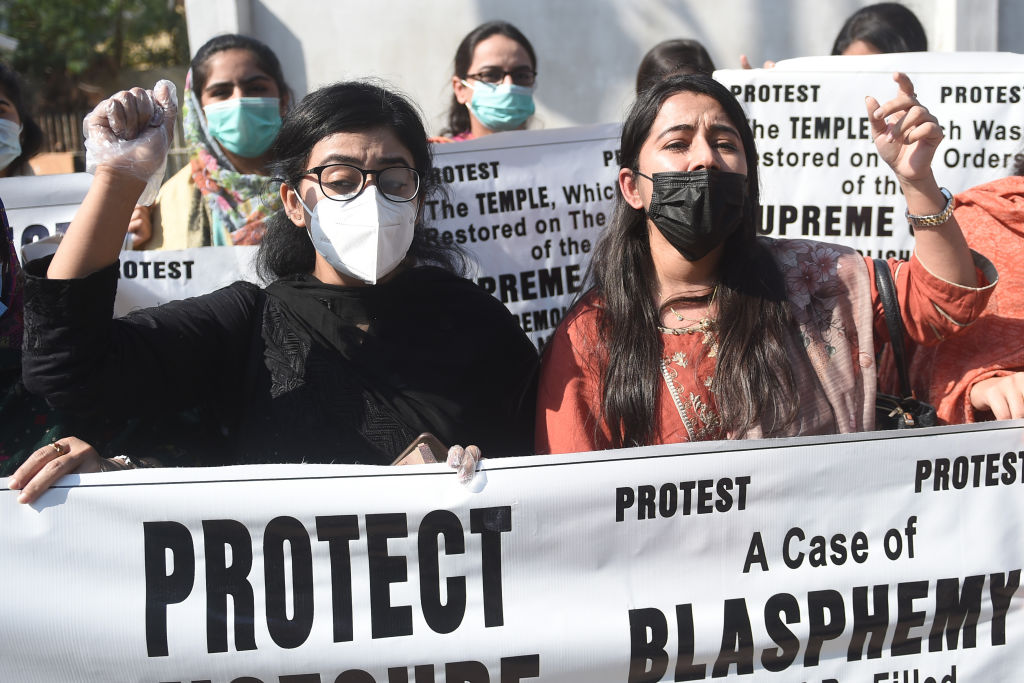 Members of Pakistan Hindu Council hold placards and shout slogans during a protest against a mob attack to a Hindu temple in a remote village in Karak district, in Karachi, Pakistan, in December 2020. (Photo by RIZWAN TABASSUM/AFP via Getty Images)

PAKISTAN authorities have completed the restoration of the Hindu temple badly damaged by a mob last week in Punjab province and arrested around 90 people allegedly involved in the attack.

Hundreds of people, carrying sticks, stones and bricks attacked the temple at Bhong city of Rahim Yar Khan district, some 590 km from Lahore on August 4, burning parts of it and damaging the idols in protest against the release by a court of an eight-year-old Hindu boy, who was arrested for allegedly urinating in a local seminary.

The attackers, believed to be instigated by a local cleric, had damaged the idols, walls, doors and electric fittings while desecrating the temple.

A first information report was registered under terrorism and other sections of the Pakistan Penal Code against more than 150 people in connection with the incident.

“The government has completed the restoration work of the temple and handed it over to the local Hindu community,” Rahim Yar Khan district police officer Asad Sarfraz said.

“A total of 90 suspects have been arrested so far with the help of video footage and they have been produced before a court of law for physical remand,” he said.

The official added the main suspects have also been arrested and police are interrogating them.

Another official said the government has engaged workers from Hyderabad in Sindh province to make idols for the temple.

Punjab chief minister Usman Buzdar had called the attack on the temple a “shameful” act.

Pakistan’s Supreme Court on Friday (6) pulled up law enforcement agencies for failing to stop the attack and ordered the arrest of the culprits, observing that the incident tarnished the image of the country abroad.

Hindu community leader of the ruling Balochistan Awami Party (BAP) and senator Danesh Kumar condemned the attack on the temple and termed it a conspiracy against minorities living in Pakistan.

He said it was condemnable that police failed to protect the temple located just 2 km from the local police station.

He said the Hindu community in the area had informed the police about a possible attack, but the police did nothing.

He said it was unfortunate that such incidents were taking place in Pakistan.

The Council of Islamic Ideology (CII) in Pakistan has also condemned the attack, the Dawn News reported.

In a statement, it said: “Like the lives and property of non-Muslim minorities living in Pakistan, the protection of their places of worship is a legal responsibility of the state.”

“Demolishing any of their religious places of worship is a clear violation of Islamic law and Pakistani law,” it said, adding that all perpetrators of this crime must be prosecuted in accordance with the law.