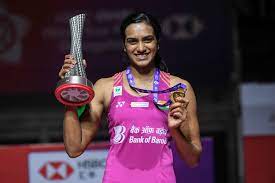 Ace Indian shuttler P V Sindhu clinched her second women’s singles title of the season with a straight game win over Thailand’s Busanan Ongbamrungphan but HS Prannoy went down fighting in the men’s singles final at the Swiss Open Super 300 badminton tournament in Basel on Sunday.

Playing her second successive final in the tournament, Sindhu, a double Olympic medallist, took 49 minutes to get the better of the fourth seeded Busanan 21-16 21-8.

However, Prannoy suffered a 12-21 18-21 defeat against Asian Games gold medallist and fourth seed Jonatan Christie of Indonesia in a 48-minute summit clash to finish runner-up.

For Sindhu, it was a moment of glory as she finally lifted the trophy after losing to Rio Olympics gold medallist Carolina Marin of Spain in the final of last edition.

The 26-year-old from Hyderabad has happy memories of this venue as she had also claimed the World Championships gold in 2019.

On Sunday, Sindhu registered her 16th win over Busanan in 17 meetings, having lost to the Thai only once—at the 2019 Hong Kong Open, to claim the Super 300 crown, the second lowest tier of BWF Tour events.

Sindhu had won the Syed Modi International Super 300 in Lucknow in January this year.

Sindhu rode on her attack to open up a 3-0 lead but Busanan started to stay in the rallies and produced some good quality shots to make it 7-7.

Busanan tried to keep Sindhu away from the net initially, making her move across the court but the Thai was erratic in her finishing, allowing the Indian to go into the break with a narrow two-point lead.

Busanan used her deceptions and drop shots to dictate the rallies but Sindhu relied on her retrieval skills to stay ahead.

A precise return at the backline gave Sindhu four game points and she sealed the first game when Busanan went wide.

Busanan struggled with her length after the change of sides to concede a 0-5 lead early on in the second game. Sindhu looked more aggressive as she troubled the Thai with her acute angle shots to dictate terms.

In full flow, the Indian soon cruised to a decisive nine-point advantage at the interval. She kept a firm grip on the match to gallop to 18-4, riding on her alert front court play and precise returns.

Busanan continued to hit wide and long to eventually hand over 16 match points to the Indian, who pocketed the game and the match comfortably.

Prannoy, a former world number 8, finished a creditable second best after making his first final in the last five years.

The 29-year-old from Thiruvananthapuram has been grappling with multiple health issues after being diagnosed with a gastroesophageal reflux disease in 2018 and Covid-19 infection in 2019.

On Sunday, Prannoy couldn’t match the accuracy and power of Jonatan, who looked in complete control of the final.

The Indian looked competitive in the early part of the opening game as he quickly erased the early 1-4 deficit and moved to 5-5 but Jonatan pulled away from 8-8 to take a three-point cushion at the breather.

Prannoy was erratic while Jonatan looked rock solid in his defence as the Indonesian created a huge gap with a seven-point burst to grab seven game points. The Indian saved two before conceding the opening game.

The second game was a close affair as the duo moved together till 7-7 before Jonatan again opened up a 11-7 lead at the interval.

Prannoy was not able to sustain the pressure in the rallies, while Jonatan was composed and was rewarded more often for his cross court smashes and fine front-court play.

The Indian did well to claw his way back to 13-13 but a reversal slice helped Jonatan break the run of points.

The momentum shifted again as Jonatan led 19-14 with Prannoy committing a slew of errors. Another winner gave the Indonesian five championship point. Prannoy saved three before hitting the net.