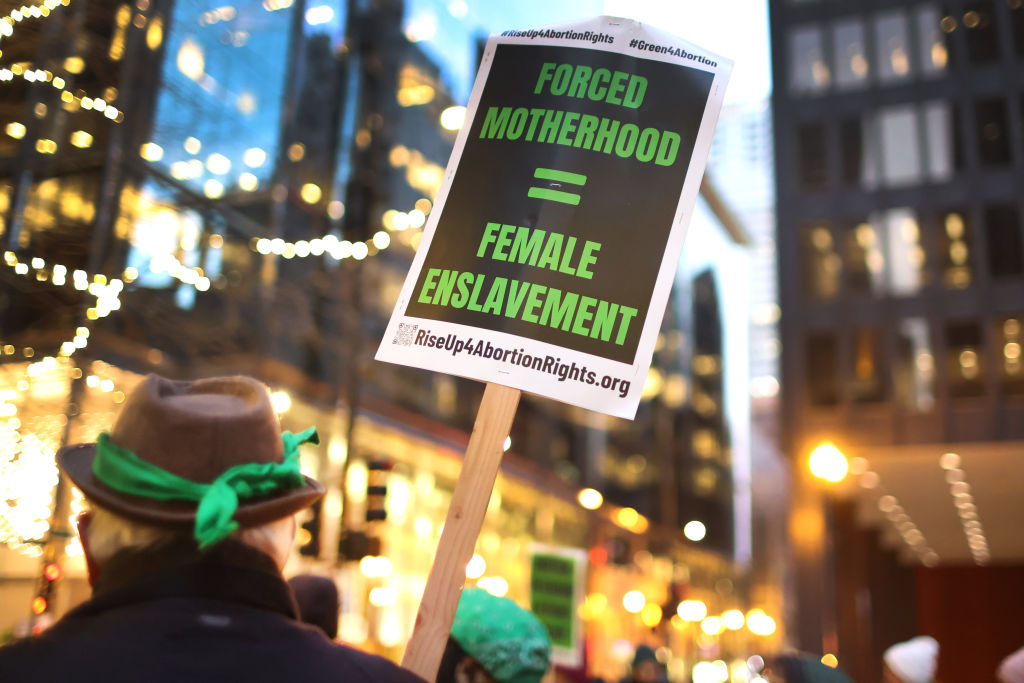 CHICAGO, ILLINOIS – DECEMBER 01: Pro-choice activists protest at the federal building plaza on December 01, 2022 in Chicago, Illinois. The protest was one of several staged nationwide on the one-year anniversary of the Supreme Court hearing of oral arguments in a Mississippi abortion case that led to a ban on most abortions after the 15th week of pregnancy. (Photo by Scott Olson/Getty Images)

Restricting abortion access is linked to increased suicide risk for women of reproductive age, a study conducted in the US found.

The interdisciplinary team from the University of Pennsylvania and Children’s Hospital of Philadelphia (CHOP), US, did not find the same association between older women and death due to motor vehicle accidents, the study said.

“Stress is a key contributor to mental health burden and a major driver of increased suicide risk,” said Ran Barzilay of the Perelman School of Medicine and CHOP.

“We found that this particular stressor – restriction to abortion – affects women of a specific age in a specific cause of death, which is suicide. That’s the 10,000-foot view,” said Barzilay.

The findings have been published in the Journal of the American Medical Association (JAMA) Psychiatry.

When the Dobbs v. Jackson Supreme Court decision came down in June, overturning the right to abortion in the United States that Roe v. Wade had bestowed in 1973, conversations about access to reproductive care took on a renewed urgency.

The prior work of Jonathan Zandberg of the Wharton School, US, had shown that more restricted access to reproductive care creates a costly trade-off for women’s career aspirations and their family formation choices. The researchers decided to examine other aspects of this dynamic, looking at the mental health implications of enforcing strict reproductive rights and more specifically, the risk of suicide, the third leading cause of death for 25- to 44-year-olds in the US.

They conducted a difference-in-differences analysis, using state-level data from 1974 through 2016 and covering the entire population of adult women during that time.

“We constructed three indices that measure access to reproductive care by looking at the enforcement of state-level legislation,” said Zandberg.

“Every time a state-enforced a law that was related to reproductive care, we incorporated it into the index,” said Zandberg.

Then, among women of reproductive age, the researchers analyzed suicide rates before and after the laws took effect, comparing those numbers to broad suicide trends and to rates in places without such restrictions.

“Comparatively, women who experienced the shock of this type of restrictive legislation had a significant increase in the suicide rate,” said Zandberg.

Next, the researchers examined whether the finding was specific to women of reproductive age or could be observed in other populations. As a comparison, they ran the same analysis for all 45- to 64-year-old women between 1974 and 2016. They did not find any effect.

Finally, they examined another common cause of death, motor vehicle death rates, and saw no effect. Controlling for potential confounders like the economy and political climate did not change the results.

Though the findings do not prove that restricting abortion access caused suicide rates to increase, the researchers say the analytic approach is one of the most rigorous methods to enable causal inference.

“This association is robust and it has nothing to do with politics,” said Barzilay. “It’s all backed by the data.” There are limitations to these conclusions, including the fact that the researchers did not have access to data about the experiences or mental health of individual women.

In other words, “we’re looking at the connection between summary data about causes of death at the state level and policy and politics over many decades. Yet, every death represents an individual moment of tragedy,” said Rebecca Waller, University of Pennsylvania, US.

“So, there’s clearly an awful lot more that we need to understand about what these findings mean for individual suicide risk,” said Waller.

Yet even with the limitations, the researchers say the findings have clinical, policy, and ethical implications.

For one, recognizing this link can change how physicians and other healthcare providers approach suicide risk classification in women of reproductive age.

Beyond that, it points to a need for better suicide-prevention policies and adds hard data to the ethical debate around abortion access.