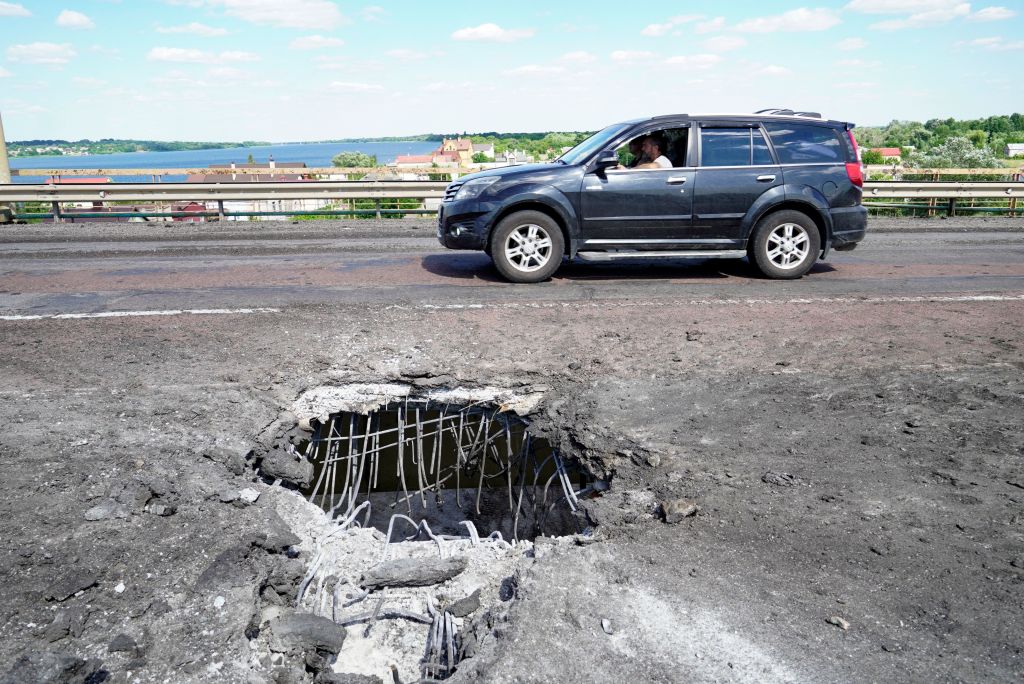 A picture taken on July 21, 2022 shows a car moving past a crater on Kherson’s Antonovsky (Antonivskiy) bridge across the Dnipro river caused by a Ukrainian rocket strike, amid the ongoing Russian military action in Ukraine. (Photo by STRINGER/AFP via Getty Images)

The British defence ministry on Thursday (4) said that Ukraine’s efforts towards retaking occupied territories in its southern parts and Kyiv’s use of western-supplied weapons is creating pressure on the Russian forces.

According to British intelligence sources, Russia was feeling threatened by the western-supplied weapons systems that are enabling the Ukrainian forces to counter-attack Moscow’s invading forces more successfully and they cited Russia’s alleged efforts to hide the damage caused to Antonovsky Bridge, which is vital for Moscow’s military supplies to the occupied Ukrainian city of Kherson, by Ukraine’s missiles last week, CNBC reported.

“Russian forces have almost certainly positioned pyramidal radar reflectors in the water near the recently damaged Antonivskiy [Antonovsky] Bridge and by the recently damaged nearby rail bridge, both of which cross over the Dnipro River in Kherson, southern Ukraine,” the UK said.

“The radar reflectors are likely being used to hide the bridge from synthetic aperture radar imagery and possible missile targeting equipment. This highlights the threat Russia feels from the increased range and precision of Western-supplied systems.”