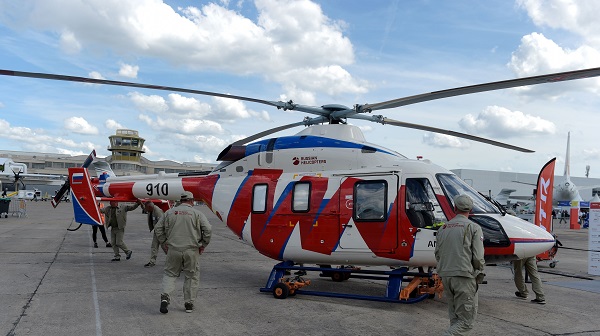 “Aurus is a premium brand which is becoming Russia’s signature. Now it includes both cars and aircraft of the same style that is as comfortable as cars,” Anatoliy Serdyukov, aviation cluster industrial director of the Rostec State Corporation, said (Photo: ERIC PIERMONT/AFP/Getty Images).

RUSSIAN helicopters, a part of Rostec state corporation of Russia, is looking for promoting its chopper Ansat for the civilian market in India.

“We are hopeful of promoting Ansat in India. We have very good prospects. We have applied for certificate to aviation officials of India in the beginning of this year,” Artom Fetisov, sales director of Russian Helicopters, told reporters during the ongoing MAKS air show in Zhukovsky, Russia.

The company presented Ansat helicopter with highly comfortable cabin in Aurus car brand style for the first time in the ongoing event.

The luxury version of the helicopter, which has the largest cabin in its class, is showcased at the static display at the show.

“Aurus is a premium brand which is becoming Russia’s signature. Now it includes both cars and aircraft of the same style that is as comfortable as cars,” Anatoliy Serdyukov, aviation cluster industrial director of the Rostec State Corporation, said.

He said that the advantages of the helicopters have been appreciated both in Russia and abroad.

“The new version of Ansat confirms that this is a multi-purpose helicopter and that there is great potential for its transformation to meet the requirements of various customers,” he said.

The helicopter has a light protection system with touch control. This technology has been used for the first time for a helicopter’s VIP cabin.

Individual lights and gaspers ensure additional comfort for each passenger. Besides, there are jacks for charging devices.

The light multi purpose helicopter is equipped with two engines and can be used for normal passenger and VIP transport, cargo delivery, environmental monitoring and as an air medical helicopter.

As many as 635 companies from around the world are participating in the MAKS-2019 International Aviation and Space Salon is organised from August 27-September 1 which is organised by the Ministry of Industry and Trade of the Russian Federation and State Corporation Rostec.

Mid-range aircraft, MS-21-300, has also been unveiled by Rostec’s key holding company United Aircraft Corporation in the event and is displayed to the general public for the first time.

In addition, the first serially produced Mi-38 helicopter in VIP configuration is also shown for the first time at MAKS.

Also, the newest Russian Ka-62 helicopter is taking part in a flight program for the first time.

In military part of the show, fifth-generation fighter plane Su-57 and light military transport aircraft IL-112VE are the main attractions.