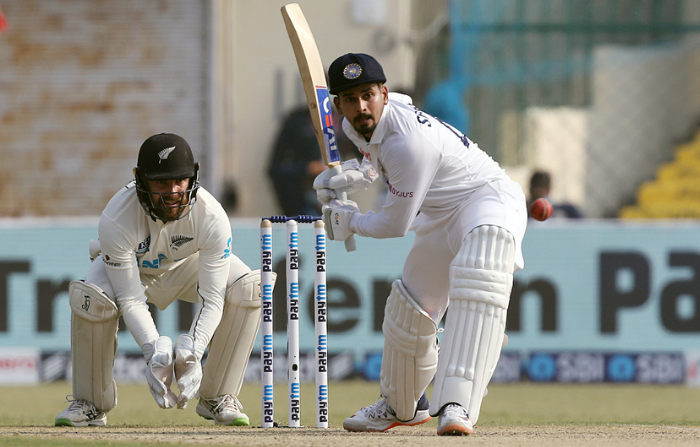 The 26-year-old right-handed batter, who made his Test debut four years after starting his international career, scored 75 not out on Day 1 of the game on Thursday (25) after India captain Ajinkya Rahane won the toss and elected to bat. He was eventually dismissed for 105 in 171 deliveries.

Iyer rose to the occasion after the hosts, who are playing without some key players in the game, lost four of their top-order wickets for less than 150 runs to add 122 runs for the fifth wicket with spinner-allrounder Ravindra Jadeja (50). He went on to complete his ton early on the second day and helped India pose a competitive first-innings total of 345. He started the day confidently by smashing Kiwi pacer Kyle Jamieson for two boundaries in his first over.

Opener Shubman Gill also scored a fifty (52) in his comeback game while Ravichandran Ashwin made 38.

Iyer, who got his maiden Test cap from the legendary Sunil Gavaskar, became the 16th Indian batter to score a century in his maiden Test. He is the 303th player to play for India in a Test match.

“A debut to remember for @ShreyasIyer15 as he brings up his maiden Test century,” the Board of Control for Cricket in India tweeted.

For the visitors, spearhead Tim Southee was the pick of the bowlers with five wickets for 69 runs. Jamieson claimed three wickets while India-born spinner Ajaz Patel got two wickets.

New Zealand were off to a cautious start with their openers Tom Latham and Will Young putting up 33 runs in the first 14 overs.